In late 2009 The Pirate Bay made an announcement which initially shocked many BitTorrent users. With immediate effect the site would stop operating its own tracker.

However, the torrent eco-system didn’t collapse because in part TPB would rely on other BitTorrent features to facilitate transfers between peers.

Although they had been introduced years before, following this announcement the relatively obscure technologies of Magnet links, DHT and Peer Exchange would be thrust into the spotlight. From their quiet beginnings people suddenly wanted to know all about these trio of terms, which prompted us to create a user guide. The mainstream acknowledgement of the trackerless torrent had truly arrived.

While .torrent files continue to be the weapon of choice for most BitTorrent users, during the last year more and more sites have brought Magnet links on board, a development encouraged by the founders of The Pirate Bay. These days most of the major torrent clients support them.

As will become clear by the conclusion of this article, getting to grips with Magnets sooner rather than later may prove prudent. To this end, today we take a look at some addons, extensions, sites and services which make the use of Magnet links just a little bit easier.

When DHT was first introduced back in 2005, the first client to implement it was Vuze (then Azureus). Unfortunately it uses a system that’s incompatible with those used in almost every other client. That means that Vuze users are cut off from everyone else. Not to worry though as with this Mainline DHT plugin, BitTorrent users are one happy swarm again. 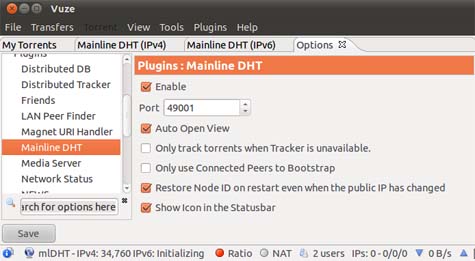 The plugin can be downloaded here or through the client’s plugin installer.

Magnet Tracker is a handy script that scans a web page looking for torrent hashes. The script then displays a window in the bottom right of a compatible browser window which allows the user to download a Magnet link. Magnet Tracker supports many of the main torrent sites and even offers functionality on Wikileaks in response to the site’s adoption of the technology last year. 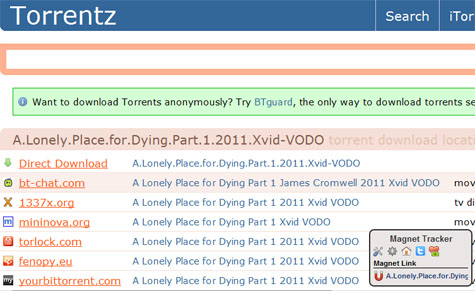 As can be seen from the configuration window below, the script also allows for the customization of the Magnet link, such as with the addition of any number of additional trackers to add that extra downloading power should it be needed. 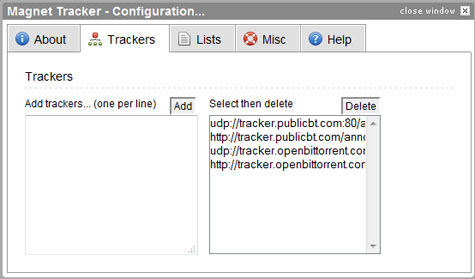 Magnet Tracker requires Firefox and GreaseMonkey to run and can be downloaded here.

Continuing on the theme, Magnet Catcher strips the concept of adding Magnet links to a page right back. As can be seen from the before and after screenshots below, this script adds Magnet links straight to the main searchpage of a site containing torrent hashes, with no need to click-through to the torrent details page.

Magnet Catcher requires Firefox and GreaseMonkey to run and can be downloaded here.

If you already know the hash value of the material you want to download from BitTorrent, this basic webpage will convert it into a Magnet link.

Don’t let the foreign text put you off – simply paste the hash into the box and click the button and a Magnet link will appear. Click this and your client will pull its peers from DHT and PEX, no torrent site needed.

As can be seen from the example below, one of the downsides to Magnet links is that they can be very long and therefore difficult to share.

Crucially they often have too many characters to be shared via Twitter, they are not clickable in IM apps like GTalk and MSN, and can be unfriendly on the eye. The Mgnet.me service changes all that.

Introduced earlier this year, Mgnet.me is a shortening service, much like Bit.ly or Tinyurl, designed specifically to convert Magnet URIs into shorter and more manageable links. As can be seen from the screenshot below, it also provides HTML code and a feature to post a newly shortened Magnet link directly to Twitter. 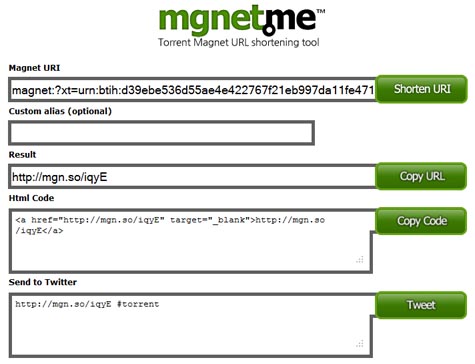 While many torrent sites are now offering Magnet links alongside the more traditional .torrent file, there are other sites which specialize in Magnet links only. The beauty for these sites is that they don’t have to carry .torrent files since they can generate Magnet links on the fly – as long as they know the hash of content in question that is.

The first search engine in our list is the ultra-minimal Sailr. As shown in the screenshot below, this Magnet-only search engine has Mgnet.me implementation as standard.

BTDigg, is the first ever search engine for trackerless torrents. Rather than searching for .torrent files around the web like most engines, BTDigg scans BitTorrent’s DHT (Distributed Hash Table) to discover new files instead.

In theory, BTDigg should be able to discover any torrent sitting in a torrent client anywhere in the world, providing the torrent has DHT enabled in its settings. This means that torrents don’t even have to be uploaded to a torrent site, further decentralizing the BitTorrent ecosystem.

Even though Magnet links (and their friends DHT and PEX) have been around for some time, the BitTorrent community has been relatively slow to adopt them as their primary route to content. The reason for that is a simple issue of supply and demand. While torrent sites, .torrent files and associated BitTorrent trackers remain in plentiful supply, most users will feel little need to make Magnet links their primary metadata choice.

However, that will all change when their favorite torrent site becomes censored by PROTECT IP or other blocking measures planned around the world.

In future – and armed with just a hash value – users may suddenly find themselves mysteriously attracted to Magnets.