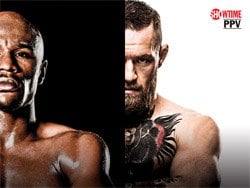 It’s the fight that few believed would become reality but on August 26, at the T-Mobile Arena in Las Vegas, Floyd Mayweather Jr. will duke it out with UFC lightweight champion Conor McGregor.

Despite being labeled a freak show by boxing purists, it is set to become the biggest combat sports event of all time. Mayweather, undefeated in his professional career, will face brash Irishman McGregor, who has gained a reputation for accepting fights with anyone – as long as there’s a lot of money involved. Big money is definitely the theme of the Mayweather bout.

Dubbed “The Money Fight”, some predict it could pull in a billion dollars, with McGregor pocketing $100m and Mayweather almost certainly more. Many of those lucky enough to gain entrance on the night will have spent thousands on their tickets but for the millions watching around the world….iiiiiiiit’s Showtimmme….with hefty PPV prices attached.

Of course, not everyone will be handing over $89.95 to $99.99 to watch the event officially on Showtime. Large numbers will turn to the many hundreds of websites set to stream the fight for free online, which has the potential to reduce revenues for all involved. With that in mind, Showtime Networks has filed a lawsuit in California which attempts to preemptively tackle this piracy threat.

The suit targets a number of John Does said to be behind a network of dozens of sites planning to stream the fight online for free. Defendant 1, using the alias “Kopa Mayweather”, is allegedly the operator of LiveStreamHDQ, a site that Showtime has grappled with previously.

“Plaintiff has had extensive experience trying to prevent live streaming websites from engaging in the unauthorized reproduction and distribution of Plaintiff’s copyrighted works in the past,” the lawsuit reads.

“In addition to bringing litigation, this experience includes sending cease and desist demands to LiveStreamHDQ in response to its unauthorized live streaming of the record-breaking fight between Floyd Mayweather, Jr. and Manny Pacquiao.”

Showtime says that LiveStreamHDQ is involved in the operations of at least 41 other sites that have been set up to specifically target people seeking to watch the fight without paying. Each site uses a .US ccTLD domain name.

Sample of the sites targeted by the lawsuit 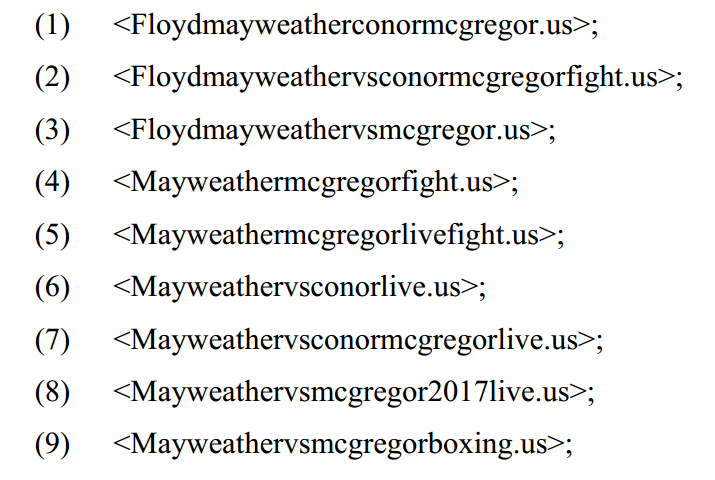 Showtime informs the court that the registrant email and IP addresses of the domains overlap, which provides further proof that they’re all part of the same operation. The TV network also highlights various statements on the sites in question which demonstrate intent to show the fight without permission, including the highly dubious “Watch From Here Mayweather vs Mcgregor Live with 4k Display.”

In addition, the lawsuit is highly critical of efforts by the sites’ operator(s) to stuff the pages with fight-related keywords in order to draw in as much search engine traffic as they can.

“Plaintiff alleges that Defendants have engaged in such keyword stuffing as a form of search engine optimization in an effort to attract as much web traffic as possible in the form of Internet users searching for a way to access a live stream of the Fight,” it reads.

While site operators are expected to engage in such behavior, Showtime says that these SEO efforts have been particularly successful, obtaining high-ranking positions in major search engines for the would-be pirate sites.

For instance, Showtime says that a Google search for “Mayweather McGregor Live” results in four of the target websites appearing in the first 100 results, i.e the first 10 pages. Interestingly, however, to get that result searchers would need to put the search in quotes as shown above, since a plain search fails to turn anything up in hundreds of results.

At this stage, the important thing to note is that none of the sites are currently carrying links to the fight, because the fight is yet to happen. Nevertheless, Showtime is convinced that come fight night, all of the target websites will be populated with pirate links, accessible for free or after paying a fee. This needs to be stopped, it argues.

“This is especially true where, as here, the work at issue is live coverage of a one-time live sporting event whose outcome is unknown,” the network writes.

Showtime informs the court that it made efforts to contact the sites in question but had just a single response from an individual who claimed to be sports blogger who doesn’t offer streaming services. The undertone is one of disbelief.

In closing, Showtime demands a temporary restraining order, preliminary injunction, and permanent injunction, prohibiting the defendants from making the fight available in any way, and/or “forming new entities” in order to circumvent any subsequent court order. Compensation for suspected damages is also requested.

Showtime previously applied for and obtained a similar injunction to cover the (hugely disappointing) Mayweather v Pacquiao fight in 2015. In that case, websites were ordered to be taken down on the day before the fight.