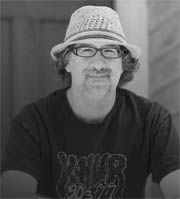 It was with interest that I read an article published this week by filmmaker and author Dan Mirvish. Best known as the co-founder of the Slamdance Film Festival, Mirvish’s piece in the Filmmaker Magazine begins with a level of honesty rarely seen in the piracy debate.

“If you’re like most young-ish filmmakers, you grew up and matured in an open source world of Napster, YouTube and BitTorrent,” Mirvish told his fellow filmmakers.

“Whether it was making mixtapes for your college girlfriend, or ripping CDs and DVDs with your film school pals, ‘appropriating media’ might have been a way of life for you to consume and share your favorite songs, films and TV.”

Mirvish appears to understand his audience and by not demonizing the ‘enemy’ too much, he also opens the door to more creative anti-piracy thinking.

“As independent filmmakers, we have a more nuanced relationship with the pirates. As ‘gifted and misunderstood artists,’ we want to share our art with the world. So, the more people who see it, the merrier! And, as ‘content creators,’ we want to expand our personal branding and rack up our hits, clicks, tweets and swipes,” Mirvish continued.

The article, which is dedicated to ways of dealing with piracy, is certainly interesting. At no point are Mirvish’s readers advised to hire a lawyer. Instead, the filmmaker focuses on how creators can try to make piracy work for them.

Speaking with TorrentFreak, Mirvish says that for years indie filmmakers have not only had to deal with getting screwed over by their distributors, but also having to contend with fans obtaining their content for free. But all is not lost.

“It gets very hard for indie filmmakers to raise money from investors if we can’t say with a straight face that there’s any hope of recouping that money,” Mirvish says.

“That’s why I’ve advocated more of a non-profit model for filmmaking that’s more in line with how society funds things like opera, symphony, community theater or public radio. You don’t see Terry Gross complaining that her Fresh Air radio show is getting pirated!”

Mirvish says that public radio has found ways of raising money via pledge drive, corporate sponsorship and limited government support. As a result, nobody expects a “return” on that investment.

“So, with the advent of crowd-funding and non-profit fiscal sponsorship, that paradigm is starting to work its way into independent filmmaking. Once that happens, then piracy will simply become part of the distribution model, and the more of it, the better.”

Look back to move forward

While still frustrated by seeing his movies pirated on a daily basis, many of Mirvish’s comments will sit nicely with pro-piracy advocates. Recalling business models of yesterday, Mirvish believes that solutions can be found to make the most of the current situation.

“Remember, for 65 years even TV shows were given away for free, over the airwaves, and the networks figured out how to make money through commercial time. Nobody called that piracy!” he says.

“So, another solution is just to build in more product integration and product placement into our films, no matter how ‘artsy’ we’d like them to be. In that regard, the more a film is pirated, the better it is for the corporate sponsors.

“Every time someone watches “Between Us” and sees my characters drinking Pabst Blue Ribbon or driving a BMW, those companies are getting free advertising – regardless of whether the film is seen on a pirated site or through legitimate means. The challenge for me and other indie filmmakers is to quantify those eyeballs and charge appropriately for them on our next films.”

While the above strategies are certainly food for thought, Mirvish also has interesting views on how piracy can work for creators in other ways.

It leaked already, make the most of it

“My pal Richard Schenkman made a terrific film a few years ago called The Man from Earth that succeeded in getting a U.S. distribution deal from Starz/Anchor Bay. But a DVD screener got ripped and posted on torrent sites a couple weeks before the official release date,” he explains.

“From out of nowhere, the film jumped over 7,000 percent on IMDb’s MOVIEMeter, garnered an 8.8 rating and became a bona fide viral hit. Eventually, his film broke even financially, and he used its widespread fan base to finance a Kickstarter campaign for a TV series pilot.”

Other ideas from the filmmaker don’t involve taking content down, but leveraging the success of ‘pirate’ versions of content to make money in other areas.

“Use the model that musicians have had to deal with since the age of Napster: If you can’t make money selling your music, then commodify your performances and pimp your merch,” he explains.

“And if the pirates are showing your movie, then place your own ads for film-related T-shirts, DVDs and other fun extras. You can use Google ads as easily as Procter & Gamble, so keyword and tag your ads so they’ll show up on piracy sites, and start pimpin’ your own merch. Ahoy, mateys, it’s the wave of the future!”

Advertising can be useful in other ways too. Instead of taking down unauthorized content from YouTube, for example, creators should consider monetizing it. He cites a company called Zefr which scours YouTube for infringing clips and instead of taking them down requests a portion of the advertising revenue.

While the approaches suggested by Mirvish aren’t going to be a good fit for all content creators, it certainly helps to turn some anti-piracy frustrations on their head.

In many respects if the pirates are doing well, then those following Mirvish’s suggestions have the potential to do well too. But only time will tell if these uneasy bedfellows can work together.