The Site Lifting the Veil on Netflix’s Geo-Restrictions

Netflix has just announced its expansion into 130 more countries around the globe but the company’s penetration hasn’t always been so deep. Millions of potential customers outside the United States have had to wait for the service to land on their shores to become a customer – well that was the theory at least.

An open secret for years and common knowledge during the past couple of weeks, it’s possible – and easy – to be a customer of Netflix in one country and gain access to it from another.

Before the service landed on their shores last year this meant that Australians with no official access to the service have been able to view using a VPN. Equally, users with limited local libraries have been able to fool Netflix into thinking they’re American – with all the riches that provides.

Last week Netflix announced that it had begun cracking down on these content-tourists (or VPN pirates as they’re sometimes called) in order to appease rightsholders but for those who can still beat the system, what are they enjoying? The answer to that question and more can be found by visiting the ‘unofficial Netflix online Global Search’ or uNoGS for short.

uNoGS is essentially a searchable database which allows users to see which content is available on Netflix in any given area in the world. For instance, when Netflix unceremoniously curtailed my viewing of Donnie Brasco in the UK earlier this month, a search on uNoGS revealed the movie was still on the service and accessible from 22 other countries. 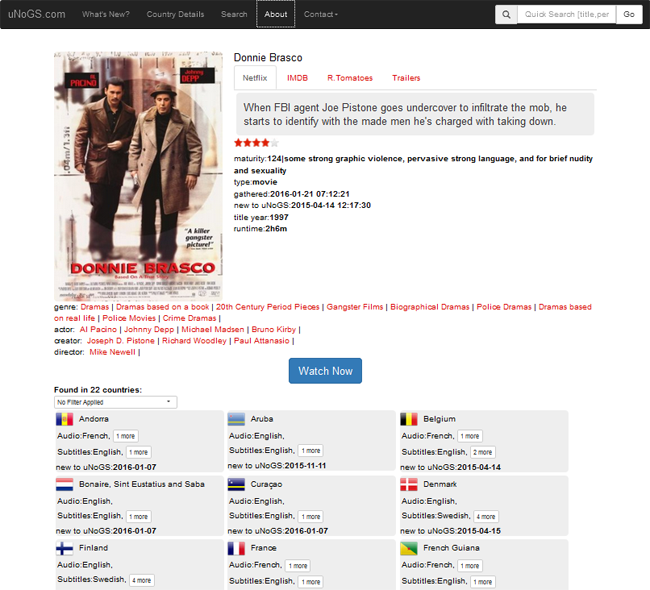 This means that by using a VPN to switch countries I was able to continue viewing, but uNoGS actually goes a step further by providing details on which VPN, proxy or DNS providers can provide access on a movie-by-movie basis.

Selecting Private Internet Access reveals five usable servers located in Finland, France, Netherlands, Sweden and Switzerland. Since the language is also displayed by uNoGS, those seeking English audio are able to rule out the second and fourth options.

Interested by the project, TorrentFreak caught up with uNoGS operator Brian to find out more about his baby.

“uNoGS is very much a one man show juggled as a hobby between work and family life. I initially built the site just for myself because the few sites that were providing a service like this were extremely limited in terms of search functionality,” Brian says.

“I wanted to be able to see what was available in every country, when it was added, when it was supposed to expire and when it actually expired. Once I completed the initial build for myself I decided to share it with everyone and uNoGS went live in early May 2015.”

Brian says the site’s aim is to provide an overview of what’s on in every country served by Netflix globally and to provide users with advanced search functionality to find titles by name as well as a variety of specific parameters. In addition to dates of availability, uNoGS provides details on audio tracks and subtitling. It also offers TV series data plus iMDb and Rotten Tomatoes listings.

Also available are total movie and TV show counts for each country. Found here, the table reveals the United States as the best Netflix region by far, with ‘French Southern Territories’ the most under-served.

In total, uNoGS indexes content available on Netflix in 243 territories and updates the same on a daily basis, but Brian suggests that in an ideal world his service wouldn’t be needed.

“Traditional media outlets like cable, satellite and terrestrial tv are dead but they haven’t fully realized this yet. Most of them are trying to hang on to their lucrative commercial models which they love but consumers hate,” he explains.

“At the moment these different providers have enough money to buy up the rights to a variety of shows making the geo-restrictions necessary. In time, this will change as more and more viewers go to disruptive services which charge a fair monthly fee and allow users to watch titles on their own terms. With the moves that Netflix is currently making, hopefully these changes will come sooner rather than later.”

In the meantime Netflix is in the clutches of copyright holders who it admits trying to appease with its recent VPN clampdown. TorrentFreak began speaking with uNoGS early January before that particular news broke but in our conversations back then, Brian made an accurate prediction.

“In the future with the advent of tools like Smartflix and search engines like uNoGS, I think [region switching] will become more mainstream and eventually upset the content providers enough to push Netflix to take action. I think this will be a shame but most likely inevitable,” he correctly concluded.

“Overall I think the VPN/DNS switchers are a good thing and most likely keep people from obtaining media through less official methods.”