At any given point in time, millions of people are sharing files via BitTorrent, transfers that are often coordinated by external torrent trackers.

Technically speaking a standalone tracker is similar to a DNS provider, it’s a ‘phone book’ which points people to content without knowing what it is.

The trackers themselves don’t host any files nor do they have a searchable index. However, that doesn’t mean that copyright holders will leave them alone.

Increasingly, trackers are asked to block infringing hashes from their service, which several do. This group includes the popular “Trackerfix” tracker. However, despite honoring removal requests the service got into trouble a few days ago.

The problems started with a wave of takedown requests sent by the Indian film production company Thirrupathi Brothers, which owns the rights to the Tamil movie Rajini Murugan.

The film company is not happy with a torrent being shared on the torrent site LimeTorrents so in order to stop it from being distributed Thirrupathi Brothers targeted a wide range of external trackers.

In a series of takedown notices sent to a variety of trackers’ internet services including CloudFlare, OVH, Private Layer, Plus Server, Velia, Host Europe, Godaddy and NetSAAP it demands an immediate shutdown of the infringing activity.

As a result of the series of requests, the Trackerfix tracker suffered several hours of downtime.

Part of the takedown notice 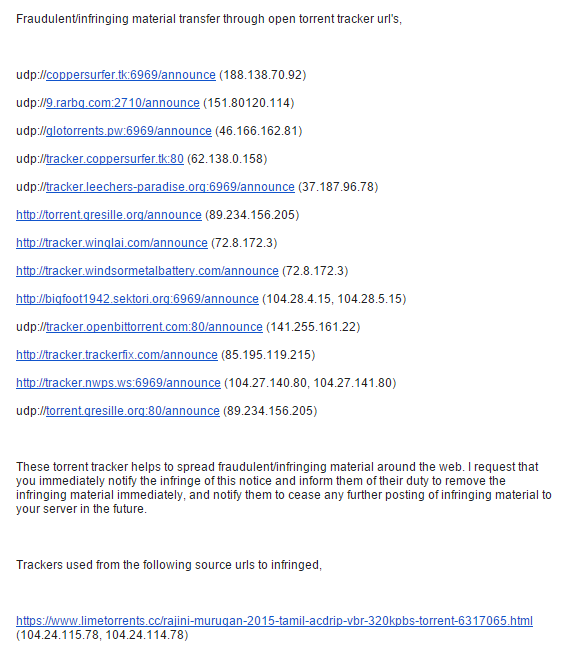 TorrentFreak spoke with the operator of the popular Trackerfix tracker who is fed up with the whole situation. Even though they had already blocked the hash from their service, the threatening language resulted in their hosting company pulling the plug.

The downtime lasted a few hours but was eventually resolved. What’s most problematic, according to the tracker operator, is that the notice itself is inaccurate and overbroad.

The email indeed appears to be missing parts and is confusing, to say the least. For one, it requests the takedown of several third-party torrent trackers for one infringing hash, out of the millions they track.

This is similar to requesting a DNS server to be taken down because it points people to The Pirate Bay.

“These torrents, videos, URL links are fraudulent/infringing material of the Tamil movie Rajini Murugan. The movie is illegally released around the web… want to stop fraudulent materials on web. The pirated videos are used your bittorrent tracker service for torrent fraudulent material transmission,” the broken English email reads.

In addition, the takedown notice references a combination of Dutch and U.S. regulations, even though several of the targeted companies are located outside of this jurisdiction.

“This letter is official notification under the Foundation for Internet Domain Registration in the Netherlands (SIDN) Dutch Copyright Act, protection of authors’ rights […] and the Digital Millennium Copyright Act (‘DMCA’), and I seek the removal of the aforementioned infringing material from your servers.”

At the time of writing the Trackerfix service is back online but the owner fears that he may have to search for a new hosting company if the takedown demands continue.

It’s not clear whether any of the other torrent trackers mentioned in the takedown requests were also pulled offline, but according to Trackerfix it’s certainly not getting easier to operate a torrent tracker.