Far beyond Bulgaria’s borders, millions of file-sharers worldwide are familiar with Zamunda and ArenaBG, the country’s largest and most famous BitTorrent trackers. Whenever online piracy is discussed in Bulgaria, it’s rare for these sites to avoid a mention.

At the end of May a TV channel owned by Central European Media Enterprises, a company with more than 50 million viewers and one in which Time Warner has a 34% stake, broadcast ‘Copyright’, a TV show which investigated the activities of Zamunda and ArenaBG.

The show made many claims about the sites, not least that users are compelled to pay to use them and that Zamunda generates more than 150,000 euros in revenue every month as a result, allegations the site denies.

The show went on to press the one-download-one-lost-sale mantra, suggested that a “3 strikes” regime should be considered to deal with infringement, and criticized local ISPs for providing high-speed connections used for pirating.

BTV also claimed to have contacted the operators of Zamunda so that their side of the story could be heard, but a source close to the site told TorrentFreak that after initially making contact and getting Zamunda’s attention (just 3 days before the show was aired), the show failed to respond to further contact from the site.

The end result, critics say, was an ‘investigative’ report biased towards rightsholders at a time when bTV is not only promoting its just-launched Voyo PPV service, but simultaneously running an anti-torrent site campaign of its own.

One critic who went further than most was author, journalist and blogger Ivan Stamenov. He recorded a detailed rebuttal of the show’s claims in a 30 minute podcast titled “bTV and Torrents: A Shock Dose of Ignorance” and posted it on YouTube.

“I created a podcast exposing extremely biased reporting on bTV. The story was about torrents, piracy and internet censorship,” Stamenov told TorrentFreak.

Stamenov said he was surprised by the popularity and favorable reception his podcast received. As a bonus the show also reached the ears of its main target – bTV – but their response was not exactly what Stamenov had hoped for. 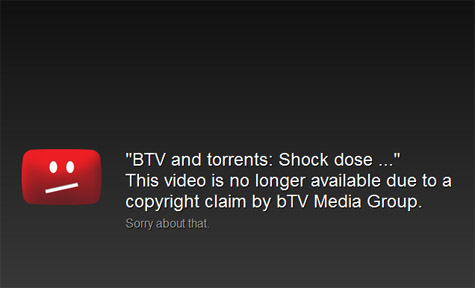 “To put it simply, they censored my podcast on YouTube, claiming it was their own intellectual property. Well, my voice is not their property. The soundtrack I used in the background was not their property either,” Stamenov told us. An additional copy posted to a site called Vbox fared no better.

But as illustrated by the image below, one thing that Stamenov did include in the YouTube video was an intro which partially featured an image of the bTV logo. He fears that bTV used the inclusion of this graphic as an excuse to take down the entire video. 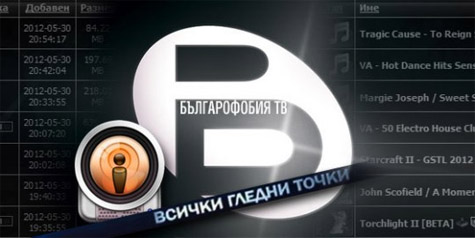 “The only way for bTV to get out of this mess with dignity is to apologize to viewers for its foul and treacherous anti-piracy campaign, and revise their attitude,” Stamenov concludes.

Currently, Bulgarian copyright law is undergoing revision. According to an activist who spoke with TorrentFreak, leaked documents suggest that the proposed changes, including making copyright infringement a more serious offense, are almost exclusively in the favor of rightholders.

Future tightening up of the law aside, silencing other people’s content today appears to be a mere flick of a switch away.