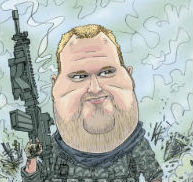 Two weeks ago Megaupload’s lawyers filed a motion to dismiss the criminal case on the basis that the company was never properly served.

This issue was previously acknowledged by Judge O’Grady, who had doubts that the case would ever go to trial due to this procedural matter.

However, the Government believes that the case should continue. In a response filed today, US Attorney Neil MacBride argues that the notion that a non-U.S. company can’t be served should be rejected by the court.

“This line of reasoning leads to the incredible conclusion that foreign corporations can commit crimes in the United States without risk of being brought to justice here,” McBride writes, adding that it would be unprecedented to dismiss the case at this time.

According to the Government the federal rules shouldn’t be interpreted so narrowly. A company should only be served on a U.S. address if they have one, it is argued.

Moving on to the money side, the U.S. asks the court to reject Megaupload’s request to return seized funds so these can be used to aid the company’s defense. Previously, the company pointed out that the Government’s argument that all revenue the site ever made came from “infringements” is flawed.

However, the U.S. stands by this assessment and tells the court that returning Megaupload’s assets is no different from handing back stolen money to a bank robber.

“The Government’s interest in forfeiture is virtually indistinguishable from its interest in returning to a bank the proceeds of a bank robbery; and a forfeiture-defendant’s claim of right to use such assets to hire an attorney, instead of having them returned to their rightful owners, is no more persuasive than a bank robber’s similar claim,” MacBride writes.

In addition to the above the Government points out that Megaupload’s motions should be rejected, because the court hasn’t yet decided whether defense lawyer Andrew Shapiro of Quinn Emanuel Urguhart & Sullivan is subject to conflicts of interest.

Shapiro’s law firm previously defended media companies that may be called in as witnesses in this case.

Attorney General MacBride concludes by asking the court to strike Megaupload’s requests. It is now up to Judge O’Grady to come to a decision on the various issues that were raised.

It is clear that the Megaupload case is heating up, even before getting into the factual allegations of the indictment. While it’s too early to conclude anything, the above suggests that the Government is uneasy with the strength of Megaupload’s defense.