In common with many other user-generated sites, Twitter is used by some of its members to host or link to copyright infringing material.

If rightsholders submit a takedown request, Twitter swiftly takes the infringing content down. Over the past several months the company processed thousands of requests and complied with most of them.

However, a new lawsuit filed in a California federal court suggests that Twitter’s takedown efforts are not always sufficient.

This week Wisconsin-based photographer Jennifer Rondinelli Reilly filed a complaint (pdf) against Twitter in which she accuses Twitter of hosting or linking to one of her works without permission.

After discovering the unauthorized use of her work the photographer sent Twitter dozens of DMCA takedown requests. However, according to the complaint Twitter failed to act on most of them.

“On November 18, 2015, Reilly sent 28 notices to Twitter regarding the Infringing Uses,” the complaint reads. “Twitter has not removed or disabled access to 50 of the 56 Infringing Uses.”

At the time of writing several of the tweets still remain online, with many linking to a poster for the University of North Texas’ annual “Poetic Justice” showcase. This poster allegedly uses the copyrighted image without permission of the photographer.

One of the DMCA notices 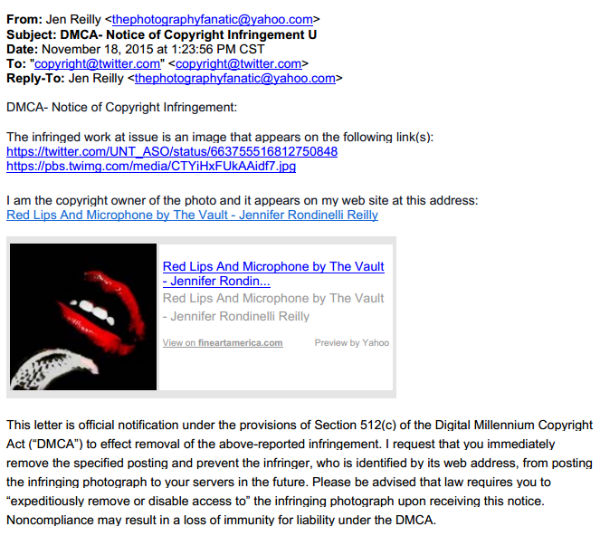 While the DMCA safe harbor shields Internet services such a Twitter from being liable for the acts of their users, this may not be the case when the company structurally fails to respond to takedown requests.

According to the photographer the social network was aware of the infringements but chose not to take appropriate action.

Reilly demands an injunction against Twitter preventing the company from infringing her work and also demands both actual and statutory damages to compensate the losses she’s suffered.

This is not the first time that Twitter has been sued for copyright infringement. Just a few months ago award-winning photographer Kristin Pierson launched a similar case. It was dismissed soon after, suggesting that both parties solved the dispute behind the scenes.