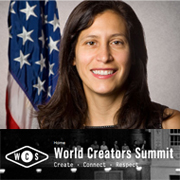 Not so long ago there was a massive effort in the United States to introduce legislation that would force companies to take responsibility for online piracy.

In January 2012 the backlash was huge, with a coordinated blackout receiving support from sites such as Google, Wikipedia and Reddit. Eventually, key supporters of the legislation such as the RIAA and MPAA had to concede the battle had been lost.

With the train wreck of SOPA providing valuable lessons, some pro-copyright advocates in the U.S. are beginning to realize that legislation is only part of the solution. Virginian Congressman Bob Goodlatte, Chairman of the House Judiciary Committee, recently said that copyright protection can also be achieved by other routes, such as through voluntary agreements with the private sector.

This theme was maintained yesterday by United States Intellectual Property Enforcement Coordinator for the White House, Victoria Espinel. Delivering a keynote speech at the World Creators Summit in Washington D.C, the ‘copyright czar’ spoke of the importance of employing a multi-directional approach to dealing with the issue of online infringement.

“We believe that if we target infringement using a variety of approaches and tools at the same time we can make some headway and reduce infringement online and protect the creativity that our artists and artists around the world create while supporting the benefits the Internet creates,” she said.

Espinel noted that “there is no silver bullet” to ending online piracy but that a combination of tools will yield results.

“We, the Obama Administration, believe that a combination of law enforcement, voluntary private sector initiatives, engagement with other countries and consumer education is effective and appropriate.”

Perhaps the most public of the private sector agreements is the one between several of the largest ISPs in the United States and the content industries represented by the RIAA and MPAA. The so-called “six strikes” initiative got underway in February.

“The goal of this agreement and under the terms of the agreement, they will notify subscribers through a series of educational alerts when their Internet service accounts appear to be misused for infringement on P2P networks,” Espinel said.

As previously reported, the ISPs involved in the so-called “six strikes” scheme have been keen to emphasize that any voluntary agreements with other private sector companies will not infringe on consumer rights. Espinel said that the Obama Administration supports initiatives that “respect privacy, due process, free speech and competition.”

Solutions must also be practical, she said, and “truly work to protect legitimate uses of the Internet. The U.S. Government should also “look for ways that we can help facilitate smooth and efficient access to creative content.”

While voluntary agreements do have some benefits, such as avoiding tough legislation that could cause collateral damage, so far there have been few signs of the kind of transparency that can promote consumer confidence in the activities currently taking place behind closed doors.