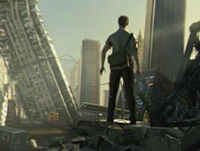 Ubisoft’s highly anticipated adventure game ‘I Am Alive‘ is expected to be released on the PlayStation Network and Xbox Live Marketplace this winter.

The first demos of the game were well received by the gaming community and as a result many PC gamers asked Ubisoft to release a PC version as well. This is not going to happen anytime soon though.

PC gamers shouldn’t “bitch” about it, ‘I Am Alive’ creative director Stanislas Mettra said in a recent interview. In his commentary Mettra insinuates that many of the people who are asking for a PC release are in fact going to end up pirating the game.

“We’ve heard loud and clear that PC gamers are bitching about there being no version for them,” Mettra told incgamers.

“But are these people just making noise just because there’s no version or because it’s a game they actually want to play? Would they buy it if we made it?”

The creative director argues that it might not be worth the effort porting the game to PC because of widespread piracy.

“It’s hard because there’s so much piracy and so few people are paying for PC games that we have to precisely weigh it up against the cost of making it. Perhaps it will only take 12 guys three months to port the game to PC, it’s not a massive cost but it’s still a cost. If only 50,000 people buy the game then it’s not worth it,” he said.

Indeed, it’s undeniable that game piracy is an issue for developers, but the question has to be asked to what extent piracy has been a factor in the non-release of a PC version.

Talking to Digital Spy Mettra reveals that not all the blame can be put on pirates.

“This is basically the second version, especially designed for XBLA and PSN in mind, knowing that we had to design something really unique, really different type of game experience, but we knew we had to push some levels that aren’t compatible with mass market gaming experiences,” Mettra said.

In other words, for this version a PC port wasn’t ever the plan, and it’s doubtful that pirates are solely to blame for that. It is of course good to use as an excuse, especially for a game that was originally announced in 2006, has suffered several setbacks since (including development by two different studios) and one that underwent a “total re-engineering” only last year.

The piracy blame-game is an interesting choice too, particularly coming from Ubisoft. The company was previously exposed using pirated music and cracks to support their games.

Luckily, not all people in the gaming industry blame piracy for all their troubles and misfortunes. Valve co-founder and managing director Gabe Newell, whose Portal 2 sold more copies on PC than on any other format, has a refreshing take on how to approach the issue of piracy. According to him, game publishers should compete with it.

“One thing that we have learned is that piracy is not a pricing issue. It’s a service issue,” he said recently. “The easiest way to stop piracy is not by putting antipiracy technology to work. It’s by giving those people a service that’s better than what they’re receiving from the pirates.”

For now, however, Ubisoft is taking the “no service” approach to ‘I Am Alive’ and actually killing PC piracy dead in its tracks, but sadly in the most cynical way possible.