PC gamers who pre-ordered Ubisoft’s Assassin’s Creed Brotherhood in advance of tomorrow’s release in the United States are getting some extra goodies with the so-called ‘digital deluxe’ version of the game.

In addition to two new single player maps, two extra multiplayer characters and a new skin for the Ezio character, it’s also packaged with a map of Rome, behind-the-scenes video and the game’s soundtrack. But there’s a more interesting extra too. Reddit user ‘plginger‘ already downloaded the soundtrack and immediately noticed something unusual, as illustrated by the screenshot below. 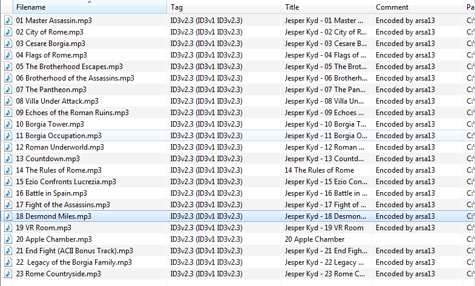 In the comment column it clearly reads “Encoded by arsa13” – and arsa13 is a member of the semi-private BitTorrent tracker, Demonoid, who uploaded the Assassin’s Creed Brotherhood soundtrack to the site more than 4 months ago.

But maybe ‘plginger’ is messing around, and retagged the files he downloaded from Demonoid for the lulz? While it’s possible, it seems unlikely. When arsa13 created his original torrent somehow a track was left out. The missing track is called Apple Chamber and, perhaps not coincidentally, the same track in the first screenshot above is the only one not tagged ‘arsa13’, suggesting it came from a separate source.

While arsa13 uploaded FLAC files which were ripped from AC3 files included on a console bonus DVD, it appears that Ubisoft have not only used these torrented tracks as a source, but reduced their quality down to MP3.

This latest event seems to be deja-vu all over again for Ubisoft following its 2008 usage of a so-called ‘No-CD’ crack from warez scene group RELOADED to fix its game Rainbox 6: Vegas 2. The publisher is yet to offer an explanation.

Can there be any better endorsement of BitTorrent, that people find it easier to access their own content through a torrent site than via their own internal methods?