After being raided by police and Trading Standards in 2015, Middlesbrough-based shopkeeper Brian ‘Tomo’ Thompson found himself in the spotlight.

“All I want to know is whether I am doing anything illegal. I know it’s a gray area but I want it in black and white,” he said last September.

Unlike other cases, where copyright holders took direct action, Thompson was prosecuted by his local council. At the time, he seemed prepared to martyr himself to test the limits of the law.

“This may have to go to the crown court and then it may go all the way to the European court, but I want to make a point with this and I want to make it easier for people to know what is legal and what isn’t,” he said. “I expect it go against me but at least I will know where I stand.”

In an opinion piece not long after this statement, we agreed with Thompson’s sentiment, noting that barring a miracle, the Middlesbrough man would indeed lose his case, probably in short order. But Thompson’s case turned out to be less than straightforward.

Thompson wasn’t charged with straightforward “making available” under the Copyrights, Designs and Patents Acts. If he had, there would’ve been no question that he’d been breaking law. This is due to a European Court of Justice decision in the BREIN v Filmspeler case earlier this year which determined that selling fully loaded boxes in the EU is illegal.

Instead, for reasons best known to the prosecution, ‘Tomo’ stood accused of two offenses under section 296ZB of the Copyright, Designs and Patents Act, which deals with devices and services designed to “circumvent technological measures”. It’s a different aspect of copyright law previously applied to cases where encryption has been broken on official products.

“A person commits an offense if he — in the course of a business — sells or lets for hire, any device, product or component which is primarily designed, produced, or adapted for the purpose of enabling or facilitating the circumvention of effective technological measures,” the law reads.

‘Tomo’ in his store 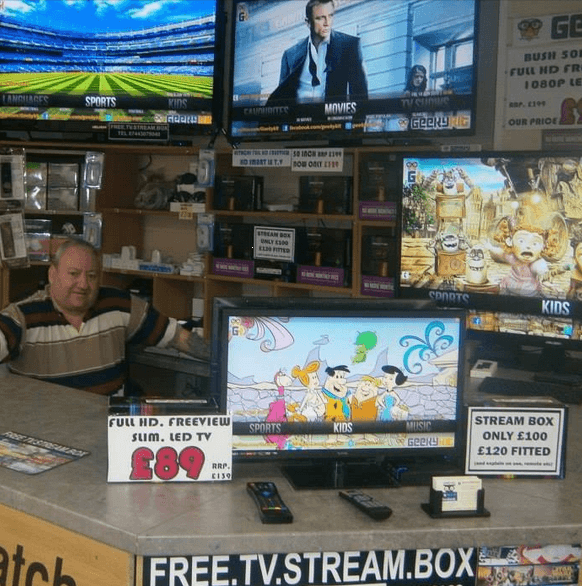 In January this year, Thompson entered his official ‘not guilty’ plea, setting up a potentially fascinating full trial in which we would’ve heard how ‘circumvention of technological measures’ could possibly relate to streaming illicit content from entirely unprotected far-flung sources.

Last month, however, Thompson suddenly had a change of heart, entering guilty pleas against one count of selling and one count of advertising devices for the purpose of enabling or facilitating the circumvention of effective technological measures.

That plea stomped on what could’ve been a really interesting trial, particularly since the Federation Against Copyright Theft’s own lawyer predicted it could be difficult and complex.

As a result, Thompson appeared at Teeside Crown Court on Friday for sentencing. Prosecutor Cameron Crowe said Thompson advertised and sold the ‘pirate’ devices for commercial gain, fully aware that they would be used to access infringing content and premium subscription services.

Crowe said that Thompson made around £40,000 from the devices while potentially costing Sky around £200,000 in lost subscription fees. When Thompson was raided in June 2015, a diary revealed he’d sold 159 devices in the previous four months, sales which generated £17,000 in revenue.

After his arrest, Thompson changed premises and continued to offer the devices for sale on social media.

“If anyone was under any illusion as to whether such devices as these, fully loaded Kodi boxes, were illegal or not, they can no longer be in any such doubt,” Judge Armstrong told the court, as reported by Gazette Live.

“I’ve come to the conclusion that in all the circumstances an immediate custodial sentence is not called for. But as a warning to others in future, they may not be so lucky.”

Also sentenced Friday was another local seller, Julian Allen, who sold devices to Thompson, among others. He was arrested following raids on his Geeky Kit businesses in 2015 and pleaded guilty this July to using or acquiring criminal property.

But despite making more than £135,000 from selling ‘pirate’ boxes, he too avoided jail, receiving a 21-month prison sentence suspended for two years instead.

While Thompson’s and Allen’s sentences are likely to be portrayed by copyright holders as a landmark moment, the earlier ruling from the European Court of Justice means that selling these kinds of devices for infringing purposes has always been illegal.

Perhaps the big surprise, given the dramatic lead up to both cases, is the relative leniency of their sentences. All that being said, however, a line has been drawn in the sand and other sellers should be aware.