After years of effort and expenditure, in 2013 Norway introduced new legislation to crack down on Internet piracy. It gave rightsholders new powers to track down file-sharers and have sites blocked at the ISP level.

To date and despite various threats not a single file-sharer has been prosecuted. No sites – not even the Pirate Bay – have been blocked. However, news coming out of Norway suggests that at least as far as the music industry goes, those legislative weapons are now obsolete.

During December 2014 music industry group IFPI conducted a nationwide survey among under 30-year-olds and discovered some amazing things about the piracy landscape in Norway. 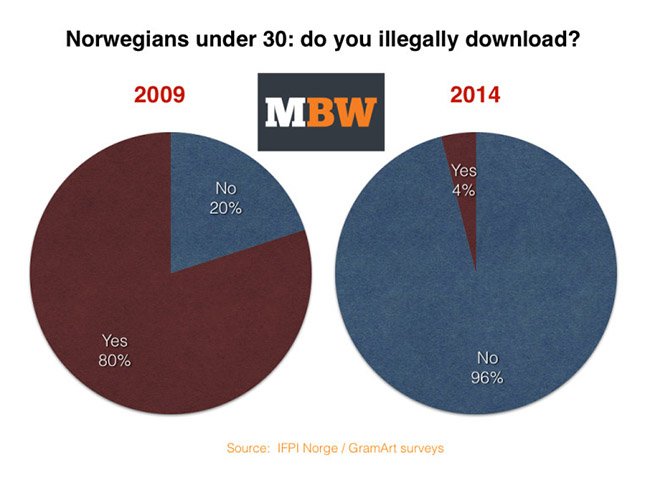 The drop is certainly dramatic, especially when coupled with the fact that less than 1% of respondents now cite file-sharing networks as their main source of obtaining music. What is telling, however, is that IFPI Norway chief Marte Thorsby did not connect the drop with anti-piracy measures.

“We are now offering services that are both better and more user-friendly than illegal platforms. In [the past] five years, we have virtually eliminated illegal file sharing in the music industry,” Thorsby said.

The December survey also found that 80% of under 30-year-olds now use streaming services as their main source of music.

“Younger audiences are using streaming services to the greatest extent. When older audiences [start] embracing these services we will probably see a somewhat different distribution of revenues,” Thorsby told MBW. “Hopefully this will also involve a better economy for several Norwegian artists and record companies.”

But while the drop in piracy will certainly be welcomed by the industry, it appears young people fleeing file-sharing networks has done nothing to boost revenues.

That being said, that particular period witnessed a dramatic change in the supply model, with physical giving way massively to digital purchases. In 2009 just 15% of content was supplied in digital format but by 2014 that had reached 86%.

For IFPI to claim the virtual elimination of music piracy is certainly an important if not unprecedented event but the take-home is simple. Provide people with effective and engaging legal alternatives and piracy becomes irrelevant.