As the name suggests, file-sharing is all about sharing. In the old days this would be achieved by having folders full of files that anyone could take. These days, with BitTorrent’s distributed nature, it’s more about sharing content and associated bandwidth.

With that in mind, good torrent etiquette dictates that one always shares at least as much as one downloads. So, if a file is 1GB in size, it’s accepted that the user should try to share 1GB back. This is known as a 1:1 ratio. Those who upload 2GB will achieve a 2:1 ratio and those aiming for 3:1 will need to upload 3GB to others.

Generally, the more people upload the healthier the swarm, so with that in mind BitTorrent Inc. has just introduced an interesting feature to new builds of their uTorrent and BitTorrent clients. It’s called Altruistic Mode and manages to be both straightforward and somewhat confusing.

Essentially, Altruistic Mode is aimed at users who want to absolutely guarantee that they are always maintaining a 2:1 ratio (2GB uploaded for every 1GB downloaded). At first view one might think that the same goal could be achieved by downloading 1GB and letting the client seed 2GB back. However, that relies on others joining the swarm later and as mentioned earlier, Altruistic Mode wants to guarantee a 2:1 ratio, not just aim for one.

So how is this achieved? Well, in normal situations torrent clients always upload as much as they can anyway, so Altruistic Mode achieves its goals by downloading less.

The initially confusing end result here is that people who enable Altruistic Mode could find that due to their client’s insistence on maintaining a 2:1 ratio, the torrent they’re downloading might never complete. It is called Altruistic Mode for a reason and when seen in that light, the importance of a finished download places second to a healthy swarm. 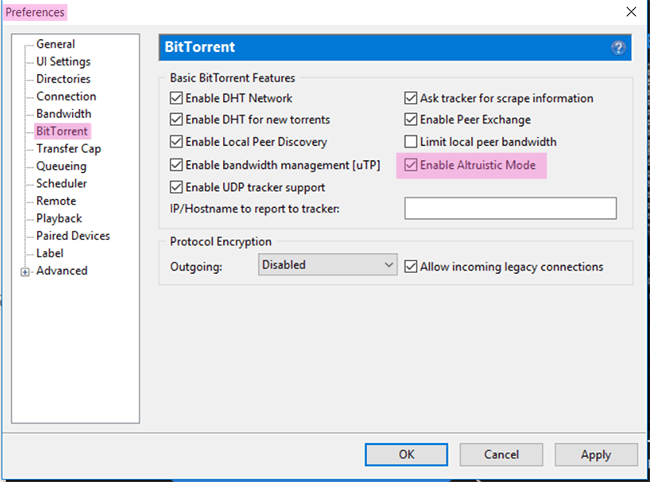 BitTorrent creator Bram Cohen says that the effects of Altruistic Mode on a torrent will depend on how that torrent would behave in the same swarm in regular ‘download’ mode.

– If Download Mode would upload at a greater than 2:1 ratio then an Altruistic Mode peer will have very similar behavior.

– If Download Mode would upload at a ratio of less than 1:1 then Altruistic Mode will do very little uploading or downloading.

“This is a simple and reliable strategy for making sure that you never get much worse than a 2:1 ratio. It results in all the behaviors described above, which do have some technical caveats….but the essential message is right in every case.”

Cohen says that a 2:1 ratio was considered a logical choice, particularly given that a 3:1 ratio or higher has the potential to impose severe restrictions on some swarms. Ironically, if too many people decide to act selflessly and turn the feature on in the same swarm, everyone’s download may never complete.

“Going for a higher number [than 2:1] could also cause swarms to no longer have a complete copy of the file if too many peers are in Altruistic Mode, which would harm not just the one peer in Altruistic Mode but other peers as well,” Cohen explains.

“Because of this, we feel that a 2:1 ratio is a sweet spot and aren’t offering any user configuration options for it. You may get ratios of greater than 2:1 in Altruistic Mode, but in those cases you could have used regular Download Mode and gotten the same results.”

For those not familiar with how BitTorrent works (and certainly many casual users), Altruistic Mode is a bit of a head-scratcher, to say the least. And, given the prospect that a download might never complete with it switched on, it seems unlikely that swarms will be inundated with clients using the mode.

Nevertheless, it’s an interesting addition to the uTorrent and Mainline BitTorrent clients and described as “an experiment” that could be further developed.

“If this goes well we may roll out another feature in the future where a peer starts out in Altruistic Mode and later switches to regular Download Mode, which would not change the upload ratio significantly but would help other peers download faster at the beginning, so peers who want to get a complete file eventually but aren’t in a rush can allow other peers who care about getting it sooner to finish first,” Cohen concludes.

Altruistic Mode is available in uTorrent 3.4.9 and above, and BitTorrent 7.9.9 and above. It is turned off by default but can be unlocked in Preferences/BitTorrent and then activated for individual torrents.

More information can be found here.