With about 150 million active users each month, uTorrent is by far the most used BitTorrent client in the West.

But despite its unrivaled popularity uTorrent didn’t have a mobile client, until today.

Earlier this year TorrentFreak revealed that BitTorrent Inc. was working on an Android app, and today the first version has been released to the public. The Beta release includes all the basic functions a downloader needs, including search and RSS feeds, and is completely free of charge.

“For the past few months our engineers have been hard at work developing a mobile BitTorrent app that is worthy of the name uTorrent,” BitTorrent Inc. announced. 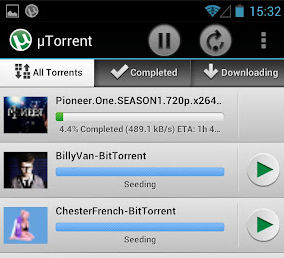 “In order to live up to our high standards, we knew that the app would need to be fast, lightweight, powerful and better than anything else currently on the market,” they add.

Until now uTorrent users could only use their Android devices to remotely control their uTorrent desktop client.

While the remote control App is widely used, a full client opens up a wide range of new options for BitTorrent users.

“We are very excited to add uTorrent for Android to our mobile product arsenal that is already reaching almost 4 million users,” BitTorrent Inc. says.

There is definitely a huge demand for BitTorrent clients among Android users. uTorrent’s current main competitors are tTorrent, aTorrent, FrostWire and aDownloader, which have been installed by millions of users.

For those stuck with an iPhone or iPad, an iOS version of uTorrent won’t be released anytime soon. “Right now we’re focusing on growing our Android clients,” BitTorrent Inc. told TorrentFreak, adding that they do have remote interfaces for iOS devices.

Aside from Android, the uTorrent developers are also working on a native Linux client. The Linux version was announced in 2010, but put on hold as the core uTorrent client had evolved considerably since the original plan.

Those interested in checking out the Android app can find the Beta release in the Google Play store as of today.