The Falcon release is one of the main pillars for uTorrent’s future. Among other things, it allows users to access their downloads from anywhere through a secure web interface. A few weeks ago the uTorrent ‘web’ feature opened up to the public and today the team announced that support for the iPhone has been added.

“In our ever-connected world, users want the ability to control their torrents on the go anytime, anywhere. So, in a continued effort to make our products more accessible we are introducing µTorrent Web for iPhone,” says Simon Morris, BitTorrent’s VP of Product Management.

“While µTorrent Web is currently only available as part of our experimental Project Falcon software, we continue to fill out the feature set prior to a large-scale rollout,”
Morris added in a recent blog post. Although we haven’t been able to confirm it, we assume that uTorrent web is supported on the iPad as well.

The Falcon release of uTorrent is key component of the client’s future. It is very similar to the standard uTorrent application but has several added features including support for the web interface and video streaming. Together with Griffin and Pheon, the Falcon project is part of the recently announced uTorrent Labs which give users early access to beta projects.

In order to use the web interface at web.utorrent.com users will have to download and install the latest Falcon release. After an encryption swipe and logging in, users will see the iPhone compatible interface that gives them all the controls they are familiar with in their regular PC client. 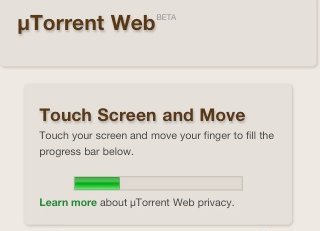 For those wondering why there are no BitTorrent-related apps in the App Store, it is because Apple notoriously bans all applications that have anything to do with BitTorrent. “Because this category of applications is often used for the purpose of infringing third party rights. We have chosen to not publish this type of application to the App Store,” is Apple’s official explanation.

Despite its desire to control every aspect of its business, Apple is not censoring the websites that people access on their phones just yet, so the uTorrent web-interface can be reached through the Safari browser. Fingers crossed.