uTorrent For Mac Grows Up (Plus iPad Love)

uTorrent for Mac saw its first public release in September 2008. Although it doesn’t hold a massive market share as the Windows client, millions of people use it on a daily basis.

Today BitTorrent Inc. announced the first stable release of the more mature (1.5) branch of the Mac client, meaning that it has matured to a point where beta testing is no longer needed.

Compared to the initial release three years ago the client has come a long way, and feature wise it has become competitive to older Mac clients such as Transmission and Vuze.

One of the major updates in the new stable release is the ability to access uTorrent remotely, either in a different location or via a mobile interface such as the iPad.

Other new features include support for RSS feeds, a scheduler and advanced controls.

Coinciding with the new Mac release of uTorrent (and Mainline) BitTorrent Inc. also launched a completely revamped version of the web interface, which is now fully functional on the iPad as well.

The latest Mac release can be downloaded over here.

The new web interface on an iPad (large) 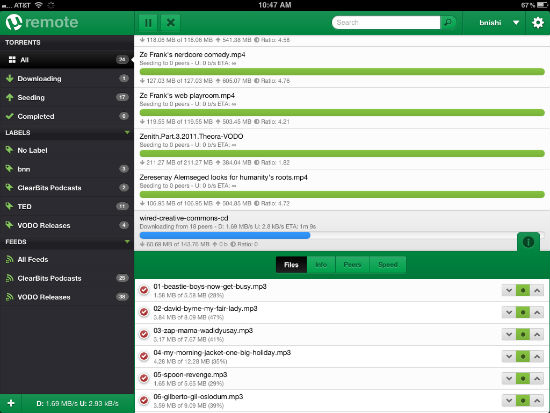