uTorrent To Launch a Paid Version

With close to 100 million active users a month, uTorrent is without doubt the most-used BitTorrent client. Over the past several months the development team has been very active, and this coming fall another major release will see the light.

The uTorrent team is currently finalizing a paid version of uTorrent that will extend the functionality of the current application. One of the key features of uTorrent Plus is the ability to convert videos and transfer files to external devices such as iPods and PSPs.

uTorrent Plus will launch as an invite-only beta before it rolls out its public release later this year. Further details on the exact specifications and capabilities of the paid uTorrent client are expected to be announced in the weeks to come.

Jordy Berson, Director of Product Management for uTorrent, told TorrentFreak that no price has been set for uTorrent Plus at this point. However, Berson assured us that the Plus variant will add new features and that no existing functionality will be stripped from the regular uTorrent version.

With uTorrent Plus BitTorrent Inc hopes to cater to the needs of many of its users, while making some extra revenue in the process.

“We think of it more as diversifying revenue sources. Some of the features will involve us paying licensing fees so it’s not like this is a pure profit business for us, although given our scale we’ll be able to negotiate good terms and pass on to customers a great value,” Berson told TorrentFreak.

One of the downsides to paid software, especially that targeted at BitTorrent users, is that it will probably be available to download for free on torrent sites. The uTorrent team is aware of this issue but doesn’t plan to include any extreme anti-piracy measures.

“We will use a pretty standard licensing system to unlock the Plus version,” Berson told TorrentFreak. 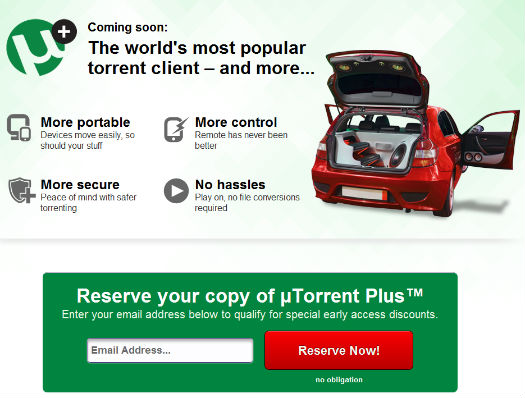 On the pre-release page of uTorrent Plus we further read that the client will offer “peace of mind with safer torrenting.” Exact details on this feature will be released at a later stage but TorrentFreak was told that it does not refer to increased anonymity, but to a type of protection that’s offered by anti-virus security suites.

uTorrent is not the first file-sharing application to be launched with a paid version. Before it was shut down LimeWire sold a pro version, and uTorrent’s main competitor Vuze also sells a pro version of their client. Interestingly, Vuze’s free version already supports video conversion and device integration, features that are expected to be added to uTorrent Plus.

Generally these pro-clients are not targeted towards savvy BitTorrent users, but to relative newcomers who are willing to pay a little bit to make their lives easier. That said, paid BitTorrent clients are certainly not the norm, so it will be interesting to see how uTorrent Plus will be received by the public.