Online pirates are increasingly turning to streaming sites to watch the latest TV-shows and blockbusters.

Aside from going to these sites directly, there are also dedicated communities where people help each other to find high-quality copies of recent releases.

The popular social networking service Reddit is one of these places. The site has various “subreddits” dedicated to streaming the latest entertainment, often from unauthorized sources.

Hollywood is not happy with this type of sharing and this week Warner Bros took action against BestOfStreamingVideo, a popular subreddit with 45,838 readers who are interested in “free” entertainment.

In a DMCA takedown notice the movie studio accuses the subreddit of infringing the copyrights of the popular 2015 movie Interstellar. A link to a pirated copy on videorev.cc was added two days ago, and Warner Bros now wants it to disappear.

The notice in question was not sent to Reddit, but Google, who was asked to remove the main subreddit page from its search results. Google, however, decided not to comply with the request which means that the page remains present in its search results. 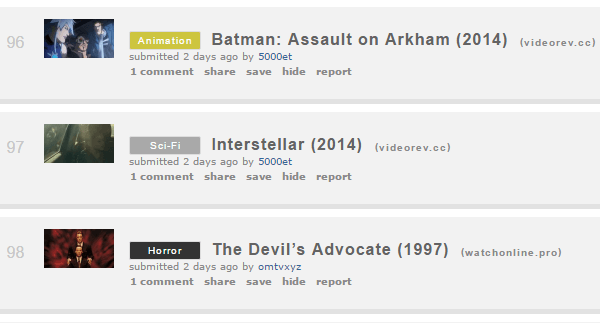 One of the reasons for Google’s refusal may be that the request is too broad, as it doesn’t list the main URL of the Reddit submission. Alternatively, the company may have decided that Reddit is better off handling takedown requests for their own platform.

In any case, the moderators of BestOfStreamingVideo are happy with the result. Moderator xosfear tells us that they simply offer a platform for users to share links, and that they don’t control what’s added.

“The sub was made as a way for our users to share streaming video, and as Reddit is a platform for free speech it is out of our control as to what our users post,” xosfear tells us.

Instead of sending takedown requests, the moderator believes Warner Bros would be better off focusing its efforts on building a centralized platform where movie fans can watch all of its movies for a fair price.

“In my opinion, if Warner Brothers spent all the time and money they spent on trying to control piracy on building a centralized platform for users to own their own movie library for a cost-effective price, they would make millions,” xosfear says.

“Look at what Steam has done for Valve and video game piracy. Of course, that would mean co-operating with other movie studios, and I doubt they would put aside their greed to do that.”

It’s unclear whether Warner Bros has also asked Reddit itself to take down the subreddit. For now, the subreddit remains online, including the link to the pirated copy of Interstellar.

Interestingly this is not the first time that the BestOfStreamingVideo has been targeted. In 2014 movie studio LionsGate sent a similar takedown request, also without result.