What.CD was founded in the fall of 2007, just days after the largest music tracker at the time, OiNK, was raided by the UK police.

“I felt sick to my stomach all morning,” was how What.CD co-founder ‘WhatMan’ described his reaction on hearing the news. “We plan to grow into a large tracker – probably not as large as OiNK, and not as open, but eventually I would like to support at least a hundred thousand users,” he added.

And so it happened. What.CD was founded and thousands of OiNK refugees soon started to populate the site with tens of thousands of torrents. In the three years that followed, What.CD outgrew its predecessor by a wide margin, which went beyond the expectations of the site’s founders.

“The original plan for What.CD was to be a worthy replacement for OiNK,” WhatMan told TorrentFreak today. “When I was on OiNK, I thought it was perfect – I figured that the community, content, and quality were unbeatable. What.CD was originally a place for OiNK refugees to hide out, and I dreamed of the site one day hosting as much content as OiNK did.”

This dream came true, and today What.CD celebrated the 1 millionth uploaded torrent, a mind boggling number especially for a private BitTorrent tracker. However, the uniqueness of this collection doesn’t just exist in impressive numbers, but in the variety and completeness of the catalogue.

“Nowadays, What.CD tracks over four times as much content as OiNK did at its peak. I’m fairly certain that it’s the largest collection of free music on the internet, and the community helps to keep the content plentiful, of high quality, and exquisitely organized,” WhatMan told us, adding: “If you’re looking for a specific master of an album in a specific format, I would be very surprised if you can’t find it extremely easily on What.CD.”

The site’s userbase is quite different from that of the average BitTorrent tracker, the co-founder told us. What.CD users are audiophiles and music lovers, with musical tastes that are quite distinct from the most downloaded tracks on the majority of BitTorrent sites.

“The What.CD community isn’t a bunch of stereotypical casual pirates who download top 40 songs to put on their ipods. What.CD is comprised mainly of music fanatics – those who really care about their music and its quality – ie. those who think of music not as entertainment, but as art.”

“There aren’t many places for these people to go – legitimate download stores don’t offer our level of quality, and CDs are prohibitively expensive for most audiophiles to build a satisfyingly large collection. So they end up here, and form the backbone of our community.” 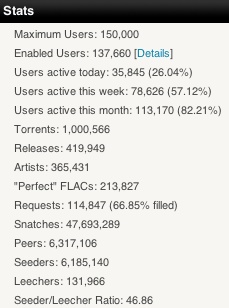 In the last three years, What.CD has not only built a million torrent music collection, but the team has also created their own tracker frontend and recently launched its own tracker software. Looking back, WhatMan is proud of what he and his team have accomplished.

“It gives me great pleasure to see other trackers running on our code. By releasing the Gazelle frontend and the Ocelot tracker, our goal was to make it easier for admins to run large sites and for users to download content. When I see the number of successful Gazelle sites, I know that we’ve at least partially succeeded.”

Like any other popular tracker, public or private, What.CD also runs into legal issues with copyright holders. The site has had to relocate to new hosting services due to music industry complaints, and more recently the IFPI has been trying to deprive the site of its income by cutting off the tracker’s donation processing services.

“We do occasionally have legal issues. Our main problem lately has been with donation processing services – every time we get a new method of accepting donations, the IFPI is very fast to send threatening emails to the service and cut off our revenue stream. It’s very difficult to find a payment processing service which will offer us the privacy and protection we need.”

The What.CD team understands that is is impossible for the site is to fly under the radar, which it never did. However, they are confident that these issues can be dealt with and that they can focus on improving the functionality of the site to keep the community and site thriving.

“Needless to say, we plan on continuing to survive – we’ve worked too long and too hard to lose the site now. I’d also like the site to expand to contain music from non-English speaking cultures, and become a haven for audiophiles from all corners of the globe,” WhatMan told TorrentFreak.

What.CD, it seems, is here to stay.