What Waffles? The Hydra Lives On 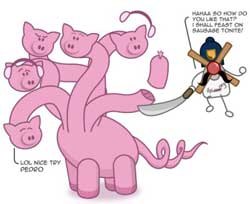 Both what.cd and waffles.fm are set to continue from where oink left off, with the same rules and requirements. Each of them aiming to provide music lovers with a place to both share and discuss music.

What.cd (currently offline at time of publication) was founded the day of the OiNK takedown. “I felt sick to my stomach all morning” was how ‘What’, co-founder of what.cd described the day OiNK got raided. “We plan to grow into a large tracker – probably not as large as oink, and not as open, but eventually, I would like to support at least a hundred thousand users,” he adds

Waffles.fm on the other hand, doesn’t open for another few hours (12:01AM PST on October 31st). “In principle we’re filling a gap in the market – a lot of people just don’t get on with open / lenient trackers. In restoring that we’re also bringing back the community OiNK had, which is a big part of it,” is how waffles co-founder ‘Barney’ put his site to TorrentFreak. He is also not being as openly ambitious at first as “What” either “We’re looking at inviting perhaps 200 or less people on the opening day. We’ll gradually invite more people as things progress.”

Neither of the admins showed much enthusiasm for BOiNK, the project that is in development by the guys behind The Pirate Bay. Their main concerns were in the overall quality, and longevity of torrents on a public tracker. Somewhat ironically, however, both sites are aiming on moving to take up permanent hosting at the PRQ datacenter, as soon as upgrades there are complete. “The electricians started their work of installing another 3x200A feed yesterday” a PRQ source told TorrentFreak today.

And the reaction of the old OiNK staffers? Paine, currently the public voice of the old OiNK team, had no real comment on them, beyond hoping they both do well, and reiterating that neither is an ‘official’ replacement for OiNK.