Who Stands to Win & Lose After Cox’s Piracy Defeat?

On Thursday following a two-week trial, a Virginia federal jury ruled that US-based ISP Cox Communications could be held liable for piracy carried out by its users.

At the time of writing Cox is considering its options, including the possibility of appeal, but should the ruling stand the piracy landscape in the United States could be changed forever.

Firstly, rival Internet service providers such as Comcast are likely to be somewhat nervous about how this decision will affect them and how they will be expected to handle copyright complaints in the future.

During the BMG case the judge found that Cox’s repeat infringer policy was lacking, so much so that it that meant the company lost its safe harbor protections under the DMCA.

It is now likely that if they haven’t already done so, major ISPs will be scrambling to have very clear repeat infringer processes committed to paper and have their employees follow them to the letter. After the decision this week, any one of them could be beaten with the same stick used to beat Cox.

The big question, however, is exactly how repeat infringers will be handled and what their ultimate punishment will be. In the Cox case the clear suggestion was that there needed to be not only suspensions, but also disconnections. That is not something that currently happens regularly in the United States.

While Cox was one of the few large ISPs that refused to join, most major ISPs in the United States are already part of the so-called ‘Six Strikes’ (Copyright Alerts) scheme. Officially known as the Copyright Alerts System, the program sees pirating subscribers receive escalating warnings about their copyright infringing behaviors.

Along the way they may also face mitigation measures, such as a temporary break in service while having to fill in a copyright-related questionnaire. But then, after the sixth ‘strike’, it appears nothing much happens.

While terminations may be threatened by ISPs, there is no evidence to suggest they are being carried out on anything like a large scale. Certainly, the ‘Six Strikes’ deal itself does not mandate disconnections for repeat infringers, it merely makes the suggestion that could be an option for ISPs.

Nevertheless, if the Cox decision stands, ISPs across the United States will be more aware of the implications of handling infringers in the way that Cox has. At the very least they will be seeking to maintain their Safe Harbor protections under the DMCA so dealing with subscribers more firmly (or at least more clearly) seems the likely outcome.

As it stands thus far, Thursday was a good day for Rightscorp. The company hasn’t been doing well for some time but its argument that ISPs must implement disconnections for repeat infringers now has more momentum than it did before. That positivity for the company also reflected in its stock Thursday, albeit it briefly. 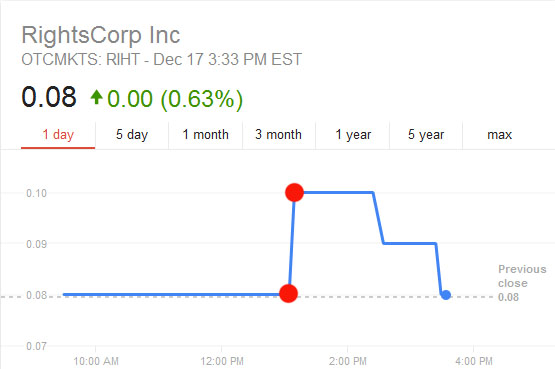 But while on the surface the disconnection threat might seem good for Rightscorp, in practice things may not work out so well.

Rightscorp currently tries to negotiate with alleged pirates with the suggestion that the anti-piracy outfit won’t press for ISP disconnection as long as people pay the cash demanded in their settlement emails. However, if one assumes that the Cox decision stands then the power over whether to disconnect someone is now well and truly out of Rightscorp’s hands.

In the past Rightscorp might’ve pushed an ISP to pressure a subscriber, but with ISPs taking more of an interest in preserving Safe Harbor protections, subscribers paying Rightscorp won’t have any positive effect on whether a customer is disconnected or not. After all, one cannot simply pay a fine to a third party to absolve an ISP of liability under the law.

Granted, outfits like BMG might agree not to sue ISPs if they pass on Rightscorp’s threats and subscribers pay their fines, but ISPs will have to put policies in place across the board and it’s difficult to imagine any copyright holders getting special treatment. Furthermore, if ISPs have solid repeat infringer policies, there will be nothing to sue them over.

Presuming that the Cox decision stands (and it may not after appeal), US Internet subscribers could be faced with a new reality, one that doesn’t simply allow them to pirate most online content with impunity. Sure, copyright trolls do snag a few thousand in their nets, but overall nothing currently happens to Internet pirates.

Presuming that “six strikes” is where the line is drawn in the sand, subscribers could be faced with not having access to the Internet, at least from their current supplier, after getting caught six times. That’s a lot of chances by almost any measure but will most users allow things to get that far?

Is it likely that many more subscribers, faced with a guarantee of disconnection, will take measures to protect their activities online by using VPNs or similar anonymity tools?

While that remains to be seen, the implications of mass anonymity could be intriguing. Not only will subscribers eliminate the threat of disconnection, but US ISPs will also have fewer concerns over disconnecting users. On top, trolls like Rightscorp will have much fewer people to chase for cash.

But let’s not get ahead of ourselves. With at least $25m at stake it’s likely that the Cox case will run for some time yet. And it could be quite a ride.