Earlier this year there was a massive uproar, bordering on full-blown panic, about Europe’s new privacy regulations.

The GDPR introduced thorough data protections for Europeans, which applies to all sites and services that serve European users.

Suddenly, tens of thousands of websites around the globe had to make sure that they weren’t crossing any lines with their data collection policies. As a result, people received a flurry of emails asking them to ‘update’ their email subscriptions, or agree to new terms.

While the mass hysteria has faded now, the fallout is still noticeable. The good news is that Europeans have regained some of their privacy online, but in some cases, this comes at an unexpected cost.

Several non-EU based websites and publications responded to the GDPR by simply blocking all EU visitors. And, after several months have passed, these blockades are still in place.

Europeans who try to access newspapers such as the NY Daily News or the Dallas Morning News are not getting in, and USA Today redirect them to a separate portal that offers a “European Experience.”

Even Unroll.me, which offers people a handy tool to unsubscribe from mailing lists, is off limits.

No entry for EU visitors 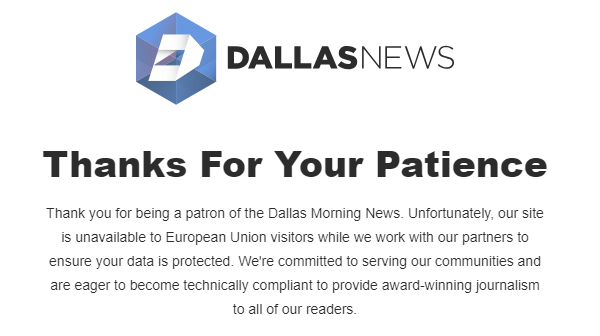 When stumbling upon one of these GDPR blocks this week, it raised a question. What will happen if the EU decides to implement Article 13 of the proposed new copyright law next year?

Article 13, also known as the ‘upload filter’ proposal, will require many large Internet platforms to make licensing deals with rightsholders, or implement measures to block pirated content on their servers.

These requirements are not limited to European companies. They will affect all larger websites and services worldwide that deal with user-uploaded content and are available in the EU.

“Copyright law, including the current version of Article 13, if passed, applies to all websites visible in the EU, so foreign ones may decide to geoblock because of this, yes,” the office of Pirate Party MEP Julia Reda informs us.

While it will be easier to hold European companies responsible in court, its scope is similar to the GDPR, which means that it will likely cause some uncertainty among foreign sites as well.

YouTube CEO Susan Wojcick, for one, appears to be pretty concerned as we highlighted earlier this week.

While it seems unlikely that YouTube would block the entire service for Europeans, especially because it already has some pretty advanced upload filters, Article 13 might spook other services enough to start geo-blocking. Especially if Europeans are a minority on the platform.

This may sound like unrealistic fearmongering to some, but is it really, if you look at all those sites and publications that still have their GDPR blocks up after months?

This type of self-censorship is not new either. Previously we have seen that several YouTube-ripping sites voluntarily blocked US and UK visitors, fearing legal repercussions from local rightsholders.

One significant difference compared to the GDRP is that, under the latest text, Article 13 will not apply to “small” sites and services. This means that services with less than 50 employees and a balance sheet not exceeding 10 million in annual turnover are excluded.

At the moment various EU bodies are negotiating the final draft of the proposal, which will make clear what’s at stake here.