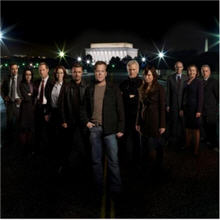 Appearing a year later than planned, Fox’s new season of 24 will premiere on US TV tonight. Set three years after the previous season and a couple of months on from the events of 24: Redemption, it features a female president for the first time. Viewers will see Kiefer Sutherland, aka Counter Terrorist Agent Jack Bauer protecting the United States from a government computer systems firewall breach.

24 is traditionally one of the hit shows on BitTorrent. Together with Heroes, Lost and Prison Break, every episode is downloaded well over a million times. The show also has a reputation of leaking out, just before it premieres.

Similar to the unscheduled appearance of season 6, the first four episodes of the new season were uploaded onto several BitTorrent sites earlier today. The source appears to be a promo DVD sent out by the studios to several media outlets, TV editors and reviewers. According to early reports, the quality of the rip is mediocre, unlike the usual high quality scene rips usually posted on BitTorrent. Indeed, the leak appears to have bypassed The Scene altogether, leaking to P2P networks first.

It is often suggested that these leaks might be intentional, that broadcasters use them to hype the show just before the season starts. Although this is often impossible to confirm, it would not be the first time that this has happened.

In 2007, a Warner Bros executive admitted that he helped to leak the pilot of ‘Pushing Daisies’. The exec wanted to make sure the show “got out there,” and said his goal was to “help the cause.” He didn’t upload it himself though, but used his neighbor’s kid to do it instead.

The leak of these 24 episodes, whether intentional or not, is guaranteed to result in a surge of word of mouth promotion, and free promotion throughout the blogosphere. If anything it will help the show, rather than hurt it.