The MPA(A) is trying to get a tight grip on piracy in Australia, mainly through affiliate groups such as AFACT. Recently published cables by Wikileaks revealed how Hollywood is secretly pushing their agenda down under.

After the failed attempt at making ISP iiNet responsible for the copyright infringements of its file-sharing customers, the anti-piracy lobby groups are now once again calling for a three-strikes system. Today a new study surfaced which, on the surface, suggests that these warnings would be very effective as a deterrent.

“ISPs hold the key to reducing online movie and TV theft by 72%,” the headline of the press release reads.

The research in question was commissioned by AFACT’s sister outfit the Intellectual Property Awareness Foundation (IPAF), which also lists the MPAA on its board. As we’ve seen before, the “independent” company that carried out the research has no web presence and no other known clients aside from IPAF.

Suspicious? Yes. But let’s skip that part for once and look at what the actual research results are.

As the headline suggests, the majority of the 1,644 participants indeed said they would stop downloading if they were notified by their ISP, 72 percent to be exact. This figure would be even higher (74%) should the ISP also threaten to terminate the Internet connection.

These numbers are nowhere near what we’ve seen in other surveys. A recent poll in France, where Internet users can actually lose their connection, revealed that only 4% of the polled file-sharers said they stopped sourcing music from illegal services out of fear of detection. In the UK, a recent survey by an ISP revealed similar results.

So why is this percentage so high in Australia? The answer is easy, and shows how grossly manipulating the headline of the press release is.

Those who take the time to read the actual results will see that the 72 percent is based on all the people who were surveyed. This includes the people who have never even used file-sharing software, so for them this was merely a hypothetical question.

According to the report, 22 percent of the respondents said they used file-sharing software in 2011, and 16 percent of the total group used it at least once a month. This puts the effectiveness of the warnings in a totally different perspective. The numbers actually show how ineffective the warnings would be.

Question asked to ALL, but only 22% use file-sharing software 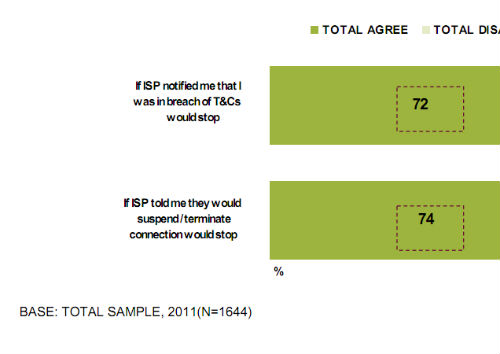 If 72 percent say they would stop sharing after a warning, then 28 percent didn’t agree with this statement. And since only 22 percent of the people said they used file-sharing software in 2011 (the only people who would be affected by a three strikes system), this means that warnings from ISPs wouldn’t even deter people who aren’t the target of this system in the first place.

Or put differently, it could very well be that none of the 22 percent file-sharers indicated that they would stop doing so when notified by their ISP.

It is unbelievable how the anti-piracy lobby has managed to spin such a negative outcome into a story that appears to support their call for a three strikes system. Perhaps even more worrying is the fact that many news outlets picked the story up without critically reviewing the results.

Luckily, not all Aussie journalists are buying it. A reporter from a large newspaper informed TorrentFreak that he is highly skeptical of everything released by these organizations now. Also, he pointed out how the press release was conveniently sent in advance to papers owned by News Corp. (Fox), which is a partner of anti-piracy groups such as IPAF, DEAA and AFACT.

Whether IPAF and partners have made the right choice by releasing their study is doubtful though. They might fool some of the public, but the actual data shows that a three-strikes system may do nothing at all to deter people from sharing movies and music online.