Anti-Piracy Outfit Supports Creators – When it Suits Them

Since this piece is about TorrentFreak content, we need to make it clear that any reader is free to do what they like with our material within the bounds of our Creative Commons license. Were not only happy for you to do that, we’re very proud that you’re sharing us with others.

However, some of our readers – those in the copyright lobby – like to make use of our content while doing their best not to give us credit. While hat-tips from them aren’t what we’re striving for here, it should be a concern to everyone when they’re prepared to throw the standards they impose on others out of the window.

In this instance i’m talking about the powerful Copyright Alliance, the US-based anti-piracy organization which counts the MPAA, RIAA and a who’s-who of industry companies among its members.

For weeks now the group’s Twitter account has been the cause of wry smiles behind this keyboard since despite the spending of the endless hours that go into producing TorrentFreak, the Copyright Alliance has gone out of its way to avoid crediting the site for its work.

At the very thin end of the scale, on several occasions TF has been the first to break news only to see the Copyright Alliance Twitter account promoting other sites reporting on the same stories much later. But all that really shows is that they’re slow to respond – big deal.

No, the major irritant is when the Copyright Alliance promotes our original content to its readers but then gives others the credit, which by their own standards is taking things too far.

As you can see, despite IBTimes clearly citing us as the source for their short summary of our exclusive on how the UK’s most prolific pirates were caught, the Copyright Alliance deliberately credited them, not us. 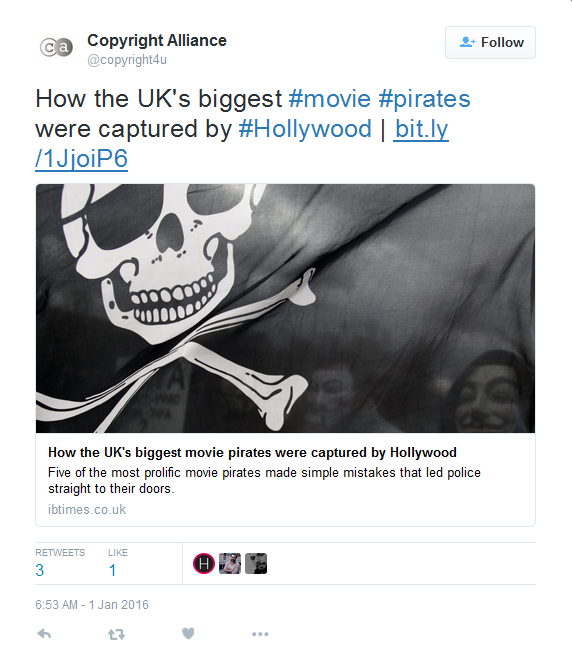 Nevertheless, that wasn’t the instance that caused the most eye-rolling.

While trying to ensure TF had fresh content every day over Christmas, we came up with a post debunking some of the most persistent piracy myths. Within hours another website took the piece, plagiarized it, and presented it as their own work.

But so what? If they can make a couple of bucks from it, good for them. It doesn’t hurt us and might even get file-sharing news out to a fresh audience somewhere. Perhaps more importantly, that site doesn’t claim to be “championing artists’ and creators’ rights.”

No, what actually lit the touch paper was the creators’ champions at the Copyright Alliance using their Twitter account to promote the plagiarized version over ours. 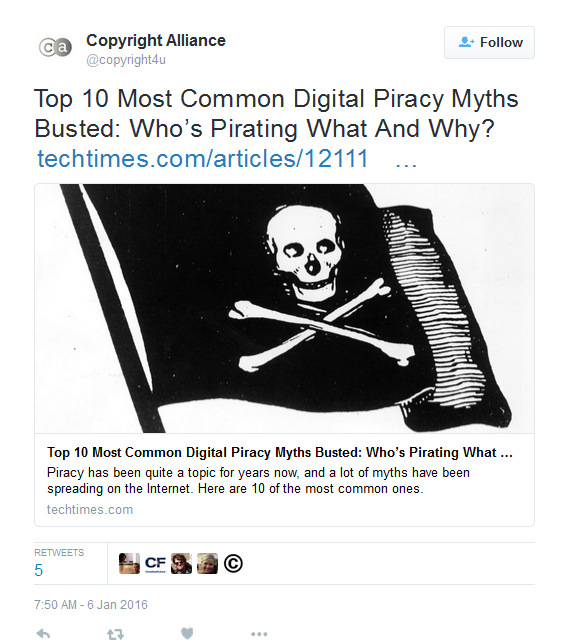 To be extremely clear, we aren’t looking for a pat on the back from the Copyright Alliance. But when they publish articles titled Giving Credit (and Hat Tips) Where Credit is Due containing the words “It’s a positive sign that people are recognizing the importance of crediting creative content and it’s origins…”, someone needs to hold them to their own standards.

Just as this article was nearing completion on Friday, the Copyright Alliance did it again by deliberately linking to a piece in Metro covering our report from earlier in the week, despite that piece clearly citing us as the source.

Again, we aren’t getting any traffic from them and don’t want or need their support, but the Copyright Alliance are showing time and again that they do not practice what they preach. And this is only what we see in public.

Love them or loathe them, anti-piracy outfits have a right to exist and a right to go about their business. And, as annoying as it might be to some, governments across the world accept their legitimacy in a way that pirates can only dream of. As a result they tend to occupy the moral high-ground almost everywhere they tread.

But what this little episode shows is that unlike a site like this, which promotes both positive and negative news about copyright and piracy issues, organizations like the Copyright Alliance are only interested in pushing their own agenda in the way they see fit.

And if that means trampling on the rights of creators whom they don’t like (or don’t get paid by), so be it.