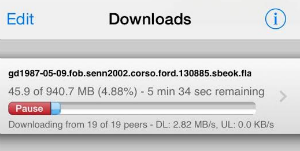 Over the past years dozens of apps have been rejected from the App Store because they mention the word BitTorrent.

Apple defended this policy and told developers that their apps were not allowed “because this category of applications is often used for the purpose of infringing third-party rights.”

This BitTorrent aversion is also one of the main reasons why popular BitTorrent clients such as uTorrent, Vuze and Transmission don’t have an Apple-approved presence on the iPhone and iPad.

This week the BitTorrent client “Blue Downloader” was approved by Apple and added to the App store. The application allows users to control and add torrent downloads through a built-in browser. The torrents can then be directly downloaded to the device.

The application handles torrent downloads without any problems, but there is one rather big restriction. The developer has decided to only allow downloads from a few trusted sources.

Trying to add files from The Pirate Bay or KickassTorrents wont work, but white-listed sites such as Archive.org, Linuxtracker and Bitlove are freely accessible.

Talking to TorrentFreak, Blue Downloader developer Harrison Tyler says that he implemented these restrictions to improve his odds of getting the app approved by Apple.

“Apple is very restrictive about torrent downloading, so I thought I would take the same precautions. If Apple were to see a completely unrestricted torrent downloader, they would not take it as well as what I have now,” Tyler tells us.

“I am not for restrictions normally, but as I am bending the accessibility of the app based on Apple’s will,” he adds.

This strategy appears to have worked, for now, as the torrent client is still available in the App store. There is a chance that it may not be around for long though. Blue Downloader carefully avoided the B-word and Apple may still ban the app if they spot the connection.

The self-censoring developer believes that BitTorrent is unfairly stigmatized. Pirated files can be found all over the Internet, and Apple has no restrictions for apps that download from direct sources.

“There is an unfortunate stigma associated with torrent downloading. Even though there is almost an equal amount of illegal files on the Internet to regularly download, people still crack down on the evils of BitTorrent,” Tyler says.

For those interested in giving the rather limited Blue Downloader a try, it’s available in the App Store for $2.99.

Update: Censorship no more? The developer is now allowing access to Google as well. This provides access to all torrent sites on the Internet.

Update: And the Google option is gone again…