This screenshot is to give you and impression of what it could look like, was a pre-BETA 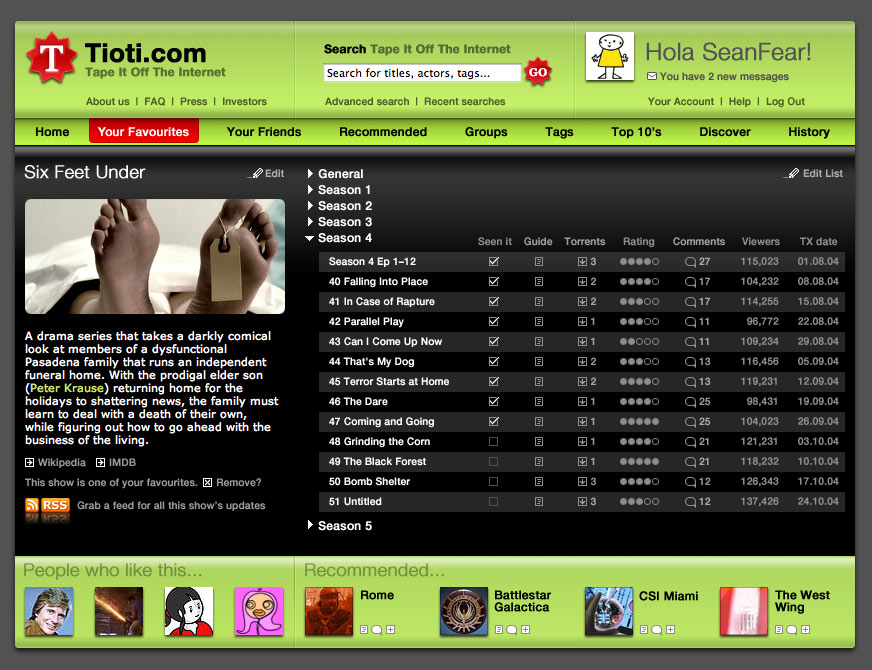 TorrentFreak: What exactly is TIOTI going to offer?

TorrentFreak: Why are you guys doing this, what’s the philosophy / motivation behind it?

Tioti: The original concept, as you may know, sprang out of the brief “Web2.0” insanity back in late last year when it seemed like everyone and his dog was repainting years old web services (you know the usual culprits – calendars, online storage, news aggregation, messageboards, whiteboards, etc) with fancy new AJAX paint. I thought it was pretty absurd at the time as none of this stuff is new or rocket science. As a gag for a few London based new media types I threw together a holding page (not entirely dissimilar to http://chalk.it which particularly amused me – where are they now?)

Inspiration hit and ideas kept coming until it seemed to become fully formed. From there things snowballed, slowly at first, switching tracks from “that’ll be a funny piss-take” to “why don’t we make the best thing ever” until here we are a few weeks away from launch.

TorrentFreak: Sounds like a lot of work, who’s going to pay the bills?

Tioti: Everyone involved so far is involved is putting in serious effort and resources to get this out and as good as we can (for a beta, we are aware of the dangers of over polishing). We’ve bootstrapped ourselves so far and think the the technology, design and IP created for this next-generation content aggregator will be of enormous interest to a few people in this space. Let’s see how it goes.

TorrentFreak: And what about partnerships, are the ISP’s TV-companies etc. etc. standing in line?

Tioti:Everyone we talk to is excited by what we’re building here. The concept, the execution, the possibilities.

TorrentFreak: And what about partners in the BitTorrent community?

Tioti: We’ll see how things go with our beta and talk about partners then.

TorrentFreak: Where did the love for BitTorrent came from?

Tioti: [rant]My *need* for BitTorrent came from living in the UK, but being addicted to the cream of American drama – West Wing, Six Feet Under, Rome that kind of thing as well as being partial to difficult to get hold of documentaries which often air only once. The straw that broke this camel’s back though was Channel 4 holding back West Wing season 6 until late October last year. Meanwhile season 7 was in full swing over the pond and online. Holding it back a year for the launch of their new “serious” channel – are you kidding me? [/rant]

Er.. I think you see where really TIOTI came from with that rant!

TorrentFreak: A lot of sites that list tv-torrents sites face legal issues these days, any thoughts on that?

Tioti: It’s a private beta for now (nearly), and we’ll cross that bridge when we come to it.

TorrentFreak: You say that the first BETA testers can play around soon, any specifics on that?

Tioti: Without getting myself into too much trouble on either side, you can count the weeks to go on your fingers – even if you’ve had a couple of circular saw related accidents along the way. We might be letting a few people in early to shake her about too.

TorrentFreak: Do you think that the web 2.0 sauce will take some of the ugliness away from BitTorrent and attract a broader public?

Tioti: I don’t know if you remember downloading music before Napster came along, but it was an experience not dissimilar to the BitTorrent experience today. And remember when you tried out Napster for the first time? We’re aiming to create that Napster moment for TV downloads. Web2.0 is neither here nor there – what matters is good architecture and fantastic design. For non-geeks, it’s all about the user experience – if it sucks they don’t come back.

TorrentFreak: How do you see the future of “p2p television”, and do you think you can contribute to it?

Tioti: There are a couple of different models, I’ll take the commercially funded model first. The current balance between advertising/tv network/content producer has been in place for over 50 years. So long in fact that many of us have forgotten that TV shows are created to sell advertising around. This model has already been crumbling for years, with the attention scarcity of key advertising markets (male 18-35s especially) reaching critical levels of late. Who makes the most money in this market? The media buyers (ad agencies) and the media sellers (TV networks). The middlemen.

Now the means of distribution have been liberated via the internet, content producers are in a position to make the shows they want and make advertising media sales direct to the buyers or, if brave and connected enough, the brands that spend the advertising dollar in the first place. Hell, most ad agency creatives want to make films and tv shows themselves anyway, let the ad agencies release long form content.

Ah, I may have said too much already… read, or better still, watch this: Mark Pesce

TorrentFreak: Anything to add to all this?

Tioti: We’re working really hard right now to get this to you, I’m working on more design of sub-sub pages the developers need right after this interview through to midnight most likely. The developers are working like crazy too on the enterprise class technologies TIOTI will be powered by. Everyone is pitching in with conference calls across half the globe, with professional analysis and management. It’s real now, and it’s scared the shit out of me!

I really hope you like TIOTI when we open. (Especially the design).

A “Napster Moment” for TV Downloads