With the U.S. presidential elections just weeks away there’s plenty of mud-slinging going on from every imaginable angle.

It’s safe to say that a few lines have been crossed here and there, and according to a complaint that was filed at an Illinois District Court this week, Donald Trump’s a pirate.

The case in question was filed by UK-based photographer David Kittos, who shares a lot of his work publicly on Flickr. This includes a photo of a bowl of Skittles, which he took to experiment with a light tent and off-camera flash.

The photo was uploaded with an “all rights reserved” notice and didn’t really get any attention, until it became part of Trump’s presidential campaign in the form of the following “advertisement” tweeted by Donald Trump Jr.

“If I had a bowl of skittles and I told you just three would kill you. Would you take a handful? That’s our Syrian refugee problem.” 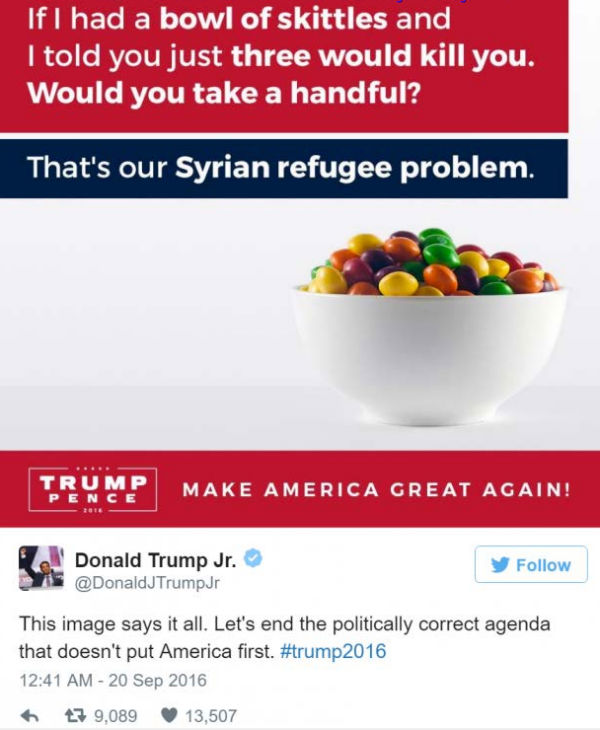 While the message itself has been widely debated already, few people knew that the image was used without permission. Making things even worse, the photographer in question turns out to be a refugee himself, as stated in the complaint.

“The unauthorized use of the Photograph is reprehensibly offensive to Plaintiff as he is a refugee of the Republic of Cyprus who was forced to flee his home at the age of six years old,” Kittos’ lawyer writes (pdf).

“Plaintiff never authorized Defendant Trump for President, Inc. or the other Defendants to use the Photograph as part of the Advertisement or for any other purpose,” the complaint adds.

In addition to Donald Trump Sr, the complaint also lists running mate Mike Pence and Trump Jr. as defendants. All are accused of both direct and secondary copyright infringement, by sharing the image online.

After about a week Trump’s tweet was removed, following a complaint from Kittos’ lawyer, but others continued to share it on social media and elsewhere.