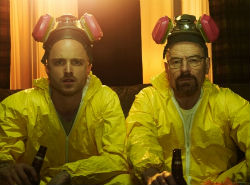 People have many different motivations to pirate TV-shows and other media. Availability is a factor, for example, and price plays a role as well.

Another important driver of piracy is exposure or promotion through traditional media.

The latter is illustrated by new research from piracy monitoring firm CEG TEK, who found that the interest in pirated copies of Emmy nominated TV-shows surged after the award show aired on television.

The company measured the BitTorrent swarms of 50 Emmy-nominated TV-shows and found a big spike in overall piracy rates.

Breaking Bad, winner of the Emmy for best drama series and several individual awards, saw a 412% increase in peers after the award ceremony.

Pirate’s interest in True Detective, House of Cards, Homeland and The Newsroom also spiked at least 340% the day after the Emmys. These peaks are unusual according to CEG TEK, who note of the 47 of the 50 nominated shows they monitored saw an increase in sharing activity.

“Typically, piracy peaks on weekends, but of the 50 shows we monitored, 47 were pirated more as a result of the Primetime Emmy Awards broadcast,” CEG TEK CTO Jon Nicolini says.

“Clearly, the prestige of the Emmys is alive and well,” he adds.

While an Emmy award is certainly a big win, some people in the TV industry believe that being the most pirated TV-show may do even more to boost a show’s profile.

Jeff Bewkes, CEO of HBO’s parent company Time Warner, previously said that Game of Thrones piracy resulted in more subscriptions for his company and that receiving the title of “most pirated” show was “better than an Emmy.”

So that’s a double score for the Emmy winners then.