The file-sharing landscape has often been described as a hydra. Take one site down, and several new ones will take its place.

Blocking or censoring sites and files may have a short-lived effect, but it does very little to decrease the availability of pirated content on the Internet.

Researchers from Boston’s Northeastern University carried out a study to see how effective various anti-piracy measures are. They monitored thousands of files across several popular file-hosting services and found, among other things, that DMCA notices are a drop in the ocean.

The researchers show that file-hosting services such as Uploaded, Wupload, RapidShare and Netload disable access to many files after receiving DMCA takedown notices, but that this does little to decrease the availability of pirated content.

Similarly, the researchers find evidence that the Megaupload shutdown did little to hinder pirates. On the contrary, the file-hosting landscape became more diverse with uploaders spreading content over hundreds of services.

“There is a cat-and-mouse game between uploaders and copyright owners, where pirated content is being uploaded by the former and deleted by the latter, and where new One-Click Hosters and direct download sites are appearing while others are being shut down,” the researchers write.

“Currently, this game seems to be in favour of the many pirates who provide far more content than what the copyright owners are taking down,” they conclude.

The study also looked at the number of sites where copyrighted content is available. The researchers scraped the popular file-hosting search engine FilesTube and found that there were nearly 10,000 distinct domain names and 5,000 IP-addresses where alleged pirate content was hosted. 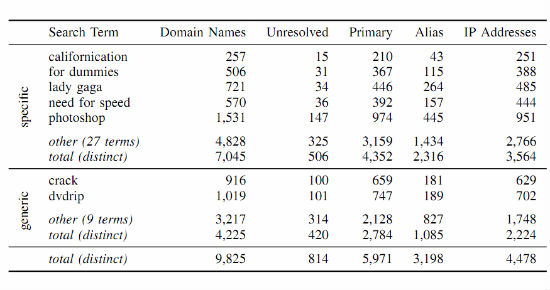 From the above the researchers conclude that anti-piracy measures aimed at reducing the availability of pirated content are less effective than often suggested. A more fruitful approach, they argue, may be to take away their ability to process payments, through PayPal or credit card processors.

The researchers end with the now common mantra that when it comes to online piracy, innovation often trumps legislation.