Both lawyers were sentenced to long prison sentences, with the first receiving the longest sentence due to his lack of cooperation. Hansmeier appealed his sentence and previously asked the court if he could await this decision out of jail.

That effort failed initially, but with the Coronavirus spreading in the US, he’s now asking the court to reconsider.

A few days ago, Hansmeier sent a handwritten letter from the Sandstone prison in Minnesota to the U.S. District Court, which included his motion for a release pending appeal. 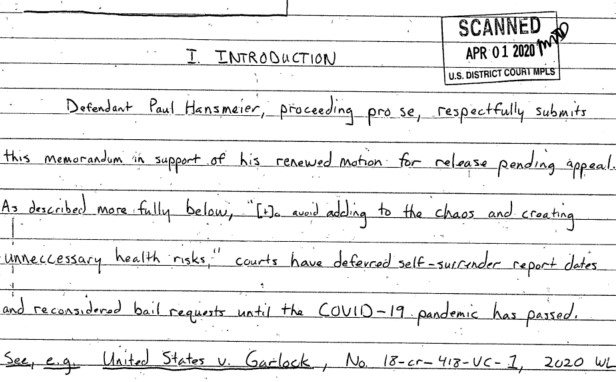 In the letter, the disbarred lawyer explains that he is better off outside, as the risk of being infected by the Coronavirus is much greater in prison.

“If released pending appeal, Hansmeier would self-quarantine at his house for 14 days, and then continue to shelter in place per the Minnesota Governor’s executive order,” Hansmeier writes, adding that he would use the time to care for his children.

According to Hansmeier, there is no need to stay in prison pending the appeal. It is not likely that he will flee or pose a danger to the community, for example, and his appeal raises a substantial issue, as the U.S. code requires.

The main reason for the request, however, is the COVID-19 pandemic. The former Prenda lawyer cites several media reports that describe the challenges and risks prisons face, quoting one insider stating that it’s “chaos” and that things will “get worse.” These descriptions also apply to Sandstone, he notes.

“Inmates at Sandstone share tight quarters in dormitory-style housing and spend much of their time together,” Hansmeier writes, adding that “…there is nothing that officials can do, short of releasing prisoners en masse, to even approach the recommendations of the CDC and the President’s Coronavirus Task Force.”

Hansmeier fears that the virus will rip through the entire prison population if it arrives, wreaking havoc, and potentially killing dozens of people. By allowing the release pending appeal, he would avoid this risk.

“[A]pplication of the current death rate associated with COVID-19, suggests that 25 inmates at Sandstone can expect to die,” Hansmeier warns.

While the disbarred lawyer argues that there is no reason for him to be exposed to unnecessary health risks, the prosecution sees things differently. In a reply motion, United States Attorney Erica MacDonald cast doubt over the request.

MacDonald refers to Hansmeier as “a healthy 38-year old man,” who “is thriving at Sandstone.” That he, because of the pandemic, now wants to be released to care for his children seems illogical.

MacDonald stresses that the only case cited to support the motion is one where a court agreed to delay the surrender date of a convict. The reason for this was to not add any people to the prison population. However, Hansmeier is in prison already.

Instead of helping the situation, the disbarred lawyer may actually make things worse, she adds.

“Hansmeier’s request to be released, to care for his children, and then to return to BOP custody if he loses his appeal, would expose the prison community at Sandstone to a greater threat from COVID-19 than simply keeping the uninfected Hansmeier in custody as the pandemic runs its course,” the Attorney General adds.

Based on these and a variety of other arguments, including the Government’s position that there is no substantial issue raised in the appeal, MacDonald urgest the court to keep the convicted Prenda lawyer in prison.

After reviewing the details, US District Judge Joan Ericksen issued a brief but clear order on Friday. Instead of going into any of the COVID-19 arguments, she denied to consider the request for a temporary release because of Hansmeier argued it himself, even though he is represented by an attorney.

A copy of Hansmeier’s pro se motion for a release pending appeal is available here and the Government’s objections can be found here.