The music companies accused the provider of not doing enough to stop pirating subscribers. Specifically, it alleged that Grande failed to terminate repeat infringers.

The case was initially scheduled to go to trial in February, but that was canceled at the last minute due to time constraints. The legal battle is now set to conclude later this year. Before going ahead, however, some outstanding issues have to be resolved.

This week, US District Court Judge David Ezra ruled on the so-called motions in limine from both sides. These are requests to exclude certain topics or evidence from being presented to the jury at trial.

The music companies, for example, asked the court to exclude certain details regarding Rightcorp, the company that sent the anti-piracy notices to Grande. These notices are crucial evidence, as Grande stands accused of not properly responding to them.

Specifically, the music companies wanted to exclude any “irrelevant or unfairly prejudicial” evidence or arguments about Rightscorp’s business practices, its finances, or the allegation that the anti-piracy firm destroyed evidence.

In his ruling, Judge Ezra sides with the Internet provider. This means that Grande can question Rightscorp’s credibility and business practices at trial. The same is true for the fact that Rightscorp previously destroyed evidence. 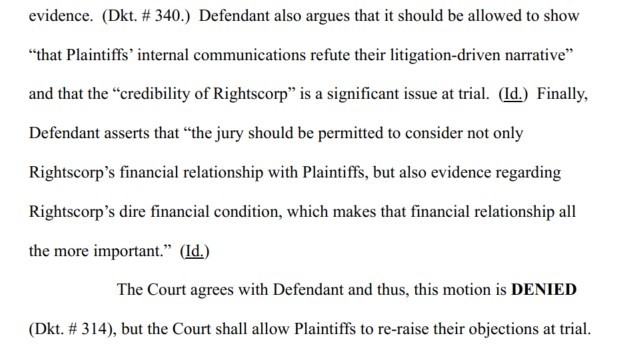 And there is more good news for Grande. The music companies also asked the court to exclude evidence about the now-defunct Copyright Alert System. Under this music industry sanctioned program, other ISPs agreed to forward piracy notices. However, they were not required to terminate repeat infringers.

Grande can use this information to argue in its favor and it will have the option to do so at trial, as the music companies’ motion to exclude evidence regarding the Copyright Alert System was denied.

Not everything in the ruling was positive for Grande though. The ISP also submitted motions in limine, several of which were denied. For example, it asked the court to exclude evidence regarding Grande’s termination of clients who failed to pay their subscription fees.

Judge Ezra denied this motion, allowing the music companies to address these issues in court. The companies could use that information to counter Grande’s defense that Internet terminations are drastic measures that should be used sparingly.

According to the current planning, the trial is scheduled to start in September. The jury selection has yet to take place. This could get interesting as well. As we reported before, the music labels plan to ask potential jurors if they read TorrentFreak.