The makers of Dallas Buyers Club have sued thousands of BitTorrent users over the past few years.

Many of these cases end up being settled for an undisclosed amount. This usually happens after the filmmakers obtain the identity of the Internet account holder believed to have pirated the movie.

The tactics used by Dallas Buyers Club (DBC) are often described as “copyright trolling,” and equated to the abusive practices of Prenda Law.

However, according to Dallas Buyers Club attorney James S. Davis this is certainly not the case. In a recent filing requesting the deposition of an alleged pirate, he distances his enforcement actions from Prenda’s previous practices.

“This was a pattern of clear abuse and is well recognized,” he adds.

It’s quite unusual for a lawyer to open his filing by scolding his former ‘colleagues,’ but in this case it serves a higher purpose.

The problem, according to Davis, is that Prenda’s actions gave rise to an “aggressive BitTorrent Defense Bar.” This group of individuals and organizations is actively protests all related copyright enforcement actions, including DBC’s cases.

This group of torrent defenders apparently uses TorrentFreak and other sites to spread their message to the public.

“[An] aggressive BitTorrent Defense Bar, whom is against any copyright enforcement, has attempted to have all copyright enforcement actions categorized as part of the ‘porn-trolling collective’ through the use of the internet with sites like, dietrolldie.com, torrentfreak.com, fightcopyrighttrolls.com, and related arguments presented to the courts,” Davis writes.

As if that wasn’t enough, the “defense bar,” which is apparently against all copyright enforcement, also organizes itself on a political level through the “copyleft” Pirate Party.

“In some countries this opposition is organized as a political party called the Pirate Party, but domestically often referred to as the Copyleft. This BitTorrent Defense Bar is critical of any copyright enforcement actions without regards to any specifics,” Davis writes. 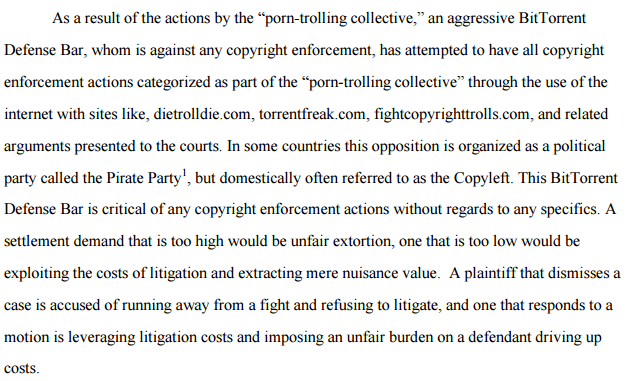 Davis tells the court that copyright holders can’t do anything right in the eyes of these torrent defenders. If settlement amounts are too high it’s seen as extortion, and if they’re too low they exploit the costs of litigation and their nuisance value.

Dallas Buyers Club’s lawyer hopes that the court will see through these arguments and judge the cases on their merit.

“On scrutiny, the courts are finding that current enforcement practices used by counsel, are not to ‘plunder the citizenry,’ ‘exploit individuals,’ monetizing, or profiting from illegal downloading, but truly motivated by Plaintiff’s desire to protect its copyrights interests and fight piracy,” he writes.

At TorrentFreak we were surprised to see ourselves mentioned in relation to a mysterious copyleft BitTorrent defense bar that rallies against all copyright enforcement.

While we have our opinions, we do not recognize ourselves in the description given by DBC’s lawyer. In fact, without copyright enforcement we would have very little to write about.

We contacted Davis for a comment on the allegations but unfortunately he hasn’t replied to our request, perhaps worried that we would unleash our inner copyleftists.

Luckily for him, however, his arguments did convince the court. Judge Jacqueline Scott granted his request to interrogate various alleged BitTorrent pirates, which he can use to find out more about the actual copyright infringers.

Some would say that such depositions can be abused as another instrument to pressure defendants into settling, but those concerns are unwarranted according to Davis, of course.