Most people have experienced the phenomenon. Someone you know just bought a nice new car of a type that previously didn’t catch the eye but now, inexplicably, the same vehicles are popping up everywhere. Almost every other journey there they are, one after another.

The same can happen with songs on the radio but of course they are put there on purpose, to catch the ear and promote the track. The question now is whether this can happen with words, or maybe there is something more coordinated afoot?

Rewind to last Friday, the release day for UK rapper Dizzee Rascal’s video to his track Goin Crazy. The song features Robbie Williams, who to be frank is a fairly unlikely pairing for Dizzee. Nevertheless, and more sniffy hardcore fans of both aside, the track appears to have been well received, but what caught our eye was in the video’s intro.

During its first few seconds Robbie is seen wearing a coat with the word Megaupload written across the back. Once the full back-shot is captured Williams looks at the camera cheekily as if he’s done something he shouldn’t and proceeds to complete the whole video with the jacket on.

And then last night, less than 72 hours later, something else caught the eye on the UK’s main state TV channel, BBC1. During ‘The Voice’, a talent show for quality singers judged by four artists including Will.i.am, the word came up again in a most unusual fashion.

Nearly 30 minutes into the show Will.i.am, real name William Adams, held his fist up to the camera and there it was – a gold custom-made ring adorned with four letters – MEGA. 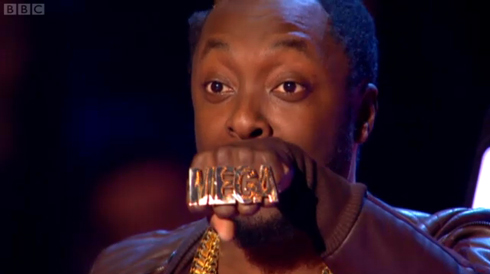 So is this a case of something appearing more just because we’re aware of it now, like our friend’s new car, or is this the start of something more interesting?

When the Robbie Williams plug came last Friday (and one from Dizzee Rascal, who wove the word Megaupload into his lyrics) the message could hardly be less ambiguous since there has only ever been one Megaupload. This latest instance involving Will.i.am is less blatant (he’s known to have used the word ‘Mega’ in the past) but what the US-based producer has that Williams doesn’t is a high-profile connection to Kim Dotcom.

In 2011, Will.i.am was the main star in Dotcom’s controversial MegaSong promotion.

“When I got to send files across the globe, I used Megaupload,” Adams declared. Of course, there is one person who can tell us if something really is going on, but while he’s being friendly, he’s also being elusive.

TorrentFreak asked Kim Dotcom if there are some guerilla marketing tactics at play here but he wouldn’t be drawn, responding only with “No comment ;-).” Last Friday, however, in the wake of the Robbie Williams reveal, Dotcom said rather more.

“Robbie, I love the Megaupload jacket!” he said. “Ready for Megabox?”

As announced by Kim Dotcom in a 2011 guest post for TorrentFreak, Megabox is a soon-to-launched platform designed to bring potentially free music to the masses by raising revenue through unconventional advertising techniques, and rewarding artists by giving them the lion’s share of the profits.

If Megabox is indeed coming soon and Williams’ and Wil.i.am’s contributions this weekend are linked, the stakes have certainly been raised. So, when the word ‘Mega’ starts to appear inexplicably with big stars more often than usual in the days and weeks to come, will Baader-Meinhof be held responsible, or someone else with a German name?

All spots to the usual address please.