In recent years entertainment industry groups have repeatedly urged Google to ramp up its anti-piracy efforts.

These remarks haven’t fallen on deaf ears and Google has made several changes to its search algorithms to make copyright-infringing material less visible.

The company demotes results from domain names for which it receives many DMCA takedown notices, for example, and it has also removed several piracy-related terms from its autocomplete feature.

The latter means that when one types “pirate ba” it won’t suggest pirate bay. Instead, people see “pirate bays” or “pirate books” as suggestions. Whether that’s very effective is up for debate, but it’s intentional.

“Google has taken steps to prevent terms closely associated with piracy from appearing in Autocomplete and Related Search,” the company previously explained.

“This is similar to the approach we have taken for a narrow class of terms related to pornography, violence, and hate speech.”

When the piracy filter was first implemented, several seemingly neutral terms such as BitTorrent and uTorrent were also targeted. While these were later reinstated, we recently noticed another autocomplete ban that’s rather broad.

It turns out that Google has recently removed the term “Kodi” from its autocomplete results. While Kodi can be abused through pirate add-ons, the media player software itself is perfectly legal, which makes it an odd decision.

Users who type in “Kod” get a list of suggestions including “Kodak” and “Kodiak,” but not the much more popular search term Kodi. 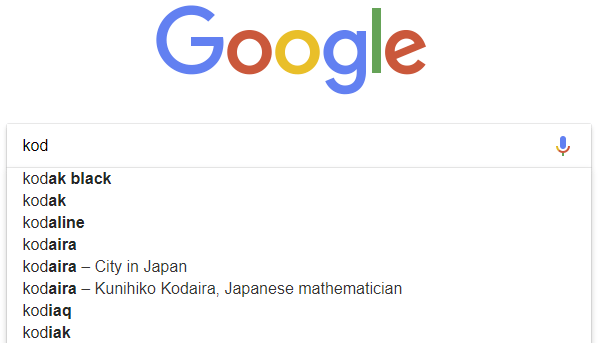 Similarly, when typing “addons for k” Google suggests addons for Kokotime and Krypton 17.6. While the latter is a Kodi version, the name of the media player itself doesn’t come up as a suggestion.

Once users type the full Kodi term and add a space, plenty of suggestions suddenly appear, which is similar to other banned terms.

Ironically enough, the Kokotime app is frequently used by pirates as well. Also, the names of all of the pirate Kodi addons we checked still show up fine in the autosuggest feature.

Unfortunately, Google doesn’t document its autocomplete removal decisions, nor does it publish the full list of banned words. However, the search engine confirms that Kodi’s piracy stigma is to blame here.

“Since 2011, we have been filtering certain terms closely associated with copyright infringement from Google Autocomplete. This action is consistent with that long-standing strategy,” a spokesperson told us.

The Kodi team, operated by the XBMC Foundation, is disappointed with the decision and points out that their software does not cross any lines.

“We are surprised and disappointed to discover Kodi has been removed from autocomplete, as Kodi is perfectly legal open source software,” XBMC Foundation President Nathan Betzen told us.

The Kodi team has been actively trying to distance itself from pirate elements. They enforce their trademark against sellers of pirate boxes and are in good contact with Hollywood’s industry group, the MPAA.

“We have a professional relationship with the MPAA, who have specifically made clear in the past their own position that Kodi is legal software,” Betzen notes.

“We hope Google will reconsider this decision in the future, or at a minimum limit their removal to search terms where the legality is actually in dispute.”