These requests have increased dramatically over the years. In 2008, the search engine received only a few dozen takedown notices during the entire year, but today it processes more than a million reported “pirate” links per day.

Google doesn’t report yearly figures, but at TF we processed all the weekly reports and found that the number of URLs submitted by copyright holders last year surpassed the 345 million mark – 345,169,134 to be exact.

The majority of these requests are honored with the associated links being removed from Google’s search results. However, Google sometimes takes “no action” if they are seemed not to be infringing or if they have been taken down previously.

Most takedown requests were sent for the domains 4shared.com, rapidgator.net and uploaded.net, with more than five million targeted URLs each. The UK Music industry group BPI is the top copyright holder of 2014, good for more than 60 million reported links. 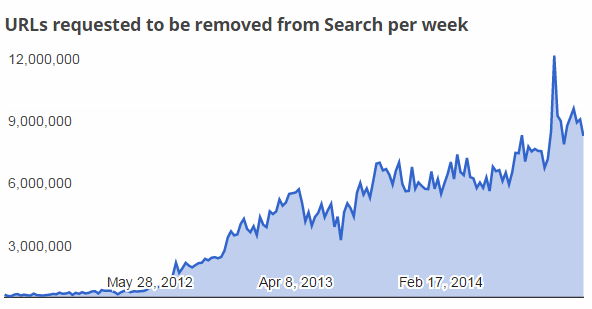 Despite the frequent use of the takedown process many copyright holders have stressed that the search giant should take responsibility and do more to tackle the piracy problem.

Facing this harsh criticism from copyright holders, Google has gradually changed its attitudes towards sites and services that are often associated with piracy.

October last year the company implemented the most significant change to its search algorithm to date, aimed at downranking sites that often link to copyright-infringing material.

This significantly reduced the visibility of pirate links in search results and had a major impact on the traffic levels of some sites. However, Google also reminded copyright holders that they too can do more to prevent piracy.

“Piracy often arises when consumer demand goes unmet by legitimate supply. As services ranging from Netflix to Spotify to iTunes have demonstrated, the best way to combat piracy is with better and more convenient legitimate services,” the company noted earlier.

In recent weeks tensions between rightsholders and Google reached a new high. After the MPAA issued a ‘snarky’ press release responding to Google’s downranking efforts, the company ended its anti-piracy cooperation with the Hollywood group.

Not much later, Google sued Mississippi State Attorney General Jim Hood who secretly collaborated with the MPAA to get certain pirate sites delisted.