After gaining serious momentum over the past seven years, the pirate IPTV phenomenon is now a major challenge for the entire audiovisual entertainment market.

While at times unpredictable, pirate subscriptions are now viewed as a credible market alternative. When compared to packages offered by legal providers, they are more comprehensive and less restrictive. And when cost enters the equation, there can only be one winner.

As one side pays millions to produce or license movies and TV shows, the other only has to worry about when they’re available to copy, so that subscriptions can be sold to the public. And anti-piracy groups making test purchases, of course.

Anyone involved in the pirate IPTV market in Sweden runs the risk of attracting local anti-piracy group Rättighetsalliansen (Rights Alliance). As one of the key forces responsible for the prison sentences served by the founders of The Pirate Bay, Rights Alliance certainly understands torrent sites. Today, however, it finds itself fighting IPTV piracy, which presents different problems and new opportunities.

The anti-piracy group has just announced the indictment of a man suspected of being behind pirate IPTV service, Smart IPTV. The platform is described as “medium-sized and well-functioning”, offering a large selection of TV channels and movies. In common with many similar IPTV services, Smart IPTV only accepted cryptocurrency.

What first drew attention to Smart IPTV isn’t clear but following an intital report by Rights Alliance, police launched their own investigation. Rights Alliance mentions no specific date but says that police targeted the home of a key suspect late 2021. Smart IPTV only accepted payment in bitcoin but that didn’t appear to slow down the investigation or lead to less evidence.

“Images from the house search show, according to the indictment, that the suspect at the time was handling Smart IPTV and was logged into both email accounts and crypto wallets with links to the service. Cryptocurrency was also taken into custody during the search,” Rights Alliance says.

During the raid, police seized five mobile phones and a computer. All were found to contain material related to IPTV and/or cryptocurrency. Among other evidence, police also found email exchanges with IPTV customers and discussions about a problematic server.

The indictment reportedly lists a sample 20 films but also seeks a seizure order of SEK 12,350,000, around $1.18 million. Rights Alliance says that during the preliminary investigation, the suspect denied committing any crimes, so guilt will have to be decided in court if there’s no change of course before then.

In the meantime, similarities exist between this IPTV case and another reported in Sweden. It also features a man arrested in 2021 in connection with a pirate IPTV service, the involvement of cryptocurrency, and a sudden twist on the final day of the trial.

In November 2021, local news outlet SVT reported that a “young man” had been arrested in Bromölla in southern Sweden. The arrest followed an investigation by Rights Alliance on behalf of major film companies including Nordisk Film and SF.

Predictably, police made a test purchase using bitcoin and then sought cooperation from payment services and domain companies, far detached from the assumed safety of the blockchain. It transpired that the man had purchased the IPTV service’s domain and then registered it in his own name.

During the raid, several phones and computers were seized along with SEK 94,000 (around $9,000) found on a bedside table in an envelope, but the real money was believed to be held elsewhere. According to investigators, customers paid to access the unnamed service using bitcoin and they believed that around SEK 1.5 million ($144,000) could have been generated by the suspect.

In a report published four days later, estimated revenues had escalated to SEK 2.8 million. In the earlier report, it was claimed that police had seized bitcoin worth SEK 358,000 ($33,400) from a wallet held on the man’s phone. That figure jumped to SEK 400,000 ($38,400) while the cash found in the envelope suddenly became cash found in a box.

Whichever details were accurate, all reports agreed that the police were much more interested in some other numbers, ones that could potentially unlock a much bigger haul. All they needed was a minor miracle or a little cooperation.

Hand Over The Codes? No, I Don’t Think So

According to a photograph supplied by police and published by Expressen, officers needed access to codes to unlock the suspect’s Trezor hardware wallet, possibly a top-of-the-range ‘Model T’ variant, according to the company’s website. 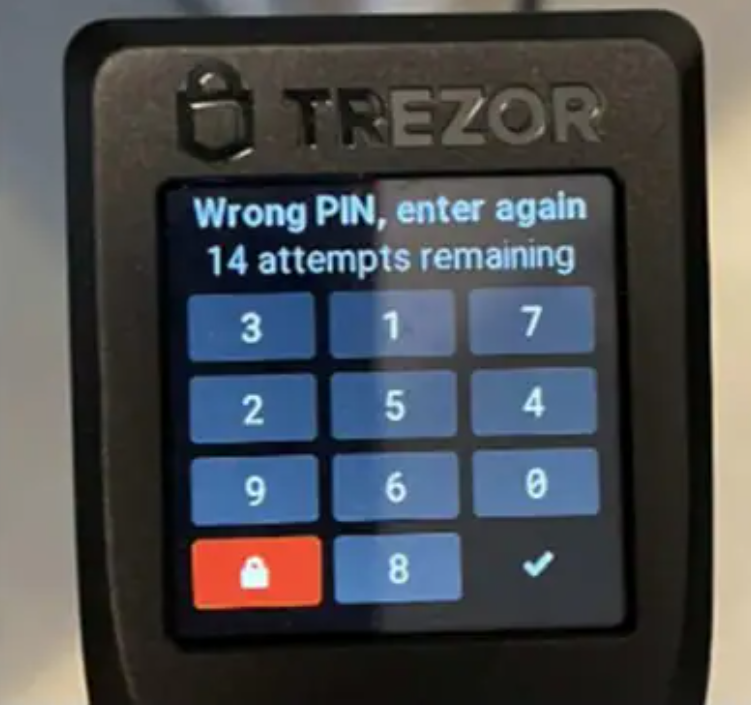 With just 14 tries left to guess a passphrase of up to 50 digits long, access to any digital assets seemed unlikely, so police asked the suspect to provide the code.

The device appeared to live up to its billing and no crypto was accessed. As far as a confession went, the man said he designed the IPTV service’s website and answered a few emails. People like him, he added, are simply on the front line.

“It is illegal television. There are those at the top and it’s like a pyramid, and it’s us at the bottom who get hit,” he said. The prosecutor agreed.

“We don’t know who is at the top of the pyramid. But he has an important role in the network,” Prosecutor David Ludvigsson said of the suspect.

Regardless of his claimed minor role, the man went on trial charged with copyright infringement. He also faced charges of improper accounting after failing to keep records of the money he received from selling illegal IPTV subscriptions.

Film companies, including Nordisk film and SF, originally sought damages of SEK 13.5 million ($1.3 million), an amount that’s very close to that now being sought from the man reported by Rights Alliance this week. When that trial will take place is unclear, but the movie companies will be hoping for a better result this time around.

The trial of the man who refused to hand over his codes took place earlier this year, and having considered the circumstances, the court preferred probation over a custodial sentence. While the Bromölla man would’ve welcomed that, he was then ordered to pay SEK 2 million ($192,000) in compensation to the rights holders.

Police still hadn’t been able to gain access to the hardware wallet. On the last day of the trial, it was emptied to the tune of several million kronor.