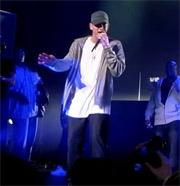 When it comes to polarizing figures standing accused of copyright infringement in New Zealand, there can be few more famous than Kim Dotcom. The entrepreneur and now political activist is in a bitter battle with not only the New Zealand and US governments, but also the world’s largest entertainment companies.

That’s why the news today that the ruling National Party is being sued for copyright infringement has somewhat amused the German-born businessman. The party is led by political rival Prime Minister John Key, one of Dotcom’s most vocal critics and a leader who the Megaupload founder says played a key role in having him arrested in 2012.

The lawsuit, filed by Eminem’s publishers, follows allegations that the song “Lose Yourself” was used in a 2014 New Zealand General Election advertising campaign run by the National Party.

Eight Mile Style and Martin Affiliated told local media that Eminem’s publishers were not approached to use the songs.

“It is both disappointing and sadly ironic that the political party responsible for championing the rights of music publishers in New Zealand by the introduction of the three strikes copyright reforms should itself have so little regard for copyright,” the publishers told 3News.

“We do not hesitate to take immediate action to protect the integrity of Eminem’s works, particularly where a party, as here, has sought to associate itself with Eminem and his work.”

The National Party insists that it obtained all necessary licenses by purchasing the track from official sources known to work with the film and entertainment industry. However, in order to try and calm down the complaint by the publishers use of the song by the party was withdrawn two weeks ago, an unusual thing to do if money had indeed been invested in a legitimate license.

“We think it’s pretty legal, we think these guys are just having a crack and have a bit of an eye for the main chance because it’s an election campaign. I think they’re just trying to shake us down for some money before the election,” said National’s campaign manager Steven Joyce.

While “pretty legal” probably isn’t the standard required by Eminem’s publishers, Kim Dotcom was already made up his mind on how to end the dispute. Posting on Twitter, the Internet Party founder didn’t let a golden opportunity pass to take a shot at his arch political rival.