LegalTorrents originally started in 2003. The website was founded by Simon Carless, and it listed a small collection of hand-picked .torrent files that were approved by content owners. Until today, Carless was the only person responsible for adding and updating content to the site, but this has now changed for the better.

A few months ago Carless gathered a group of involved people who decided to rebuild the site, in order to make it easier for users and independent publishers to add their own content. Legaltorrents aims to build an active community where users and content publishers will both benefit from.

LegalTorrents’ Jonathan Dugan told TorrentFreak: “We wanted to build a participatory community to keep the site going, and we wanted to provide a real model for content creators to share their work and be paid via donations.”

The new and improved site focuses on Creative Commons licensed content, which can be shared freely. Contrary to most other sites, publishers can choose to accept donations. A small percentage (15%) of the donations will go to the LegalTorrents team, to cover server costs and such.

Unlike in 2003, LegalTorrents now has quite a bit of competition. BitTorrent Inc., Vuze and mininova all offer content distribution platforms for independent publishers today, and NiN recently chose The Pirate Bay to share their latest album.

“BitTorrent Inc, Vuze and mininova are indeed the closest matches to LegalTorrents,” Jonathan Dugan says “However, all of them take a very commercial angle, we are taking a community participation angle.”

The site does not allow anonymous uploads but users can add content to the site once they are approved, similar to mininova’s CD, Vuze and BitTorrent. LegalTorrents hopes to add to this by creating a community where content creators can get paid for their efforts, while sharing it with others.

Recently, more and more publishers have started to use BitTorrent to distribute their works, so their is certainly a market for a site such as Legaltorrents. However, the success of the site will largely depend on the size and participation level of the community, both users and publishers. 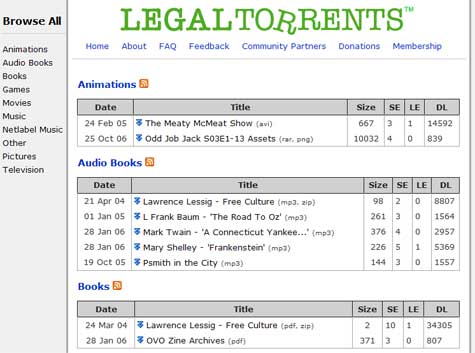