Over the past several years, the last couple in particular, piracy has stormed millions of homes around the world.

From being a widespread but still fairly geeky occupation among torrenters, movie and TV show piracy can now be achieved by anyone with the ability to click a mouse or push a button on a remote control. Much of this mainstream interest can be placed at the feet of the Kodi media player.

An entirely legal platform in its own right, Kodi can be augmented with third-party add-ons that enable users to access an endless supply of streaming media. As such, piracy-configured Kodi installations are operated by an estimated 26 million people, according to the MPAA.

This popularity has led to much interest from tabloid newspapers in the UK which, for reasons best known to them, choose to both promote and demonize Kodi almost every week. While writing about news events is clearly par for the course, when one considers some of the reports, their content, and what inspired them, something doesn’t seem right.

This week The Express, which has published many overly sensational stories about Kodi in recent times, published another. The title – as always – promised something special. 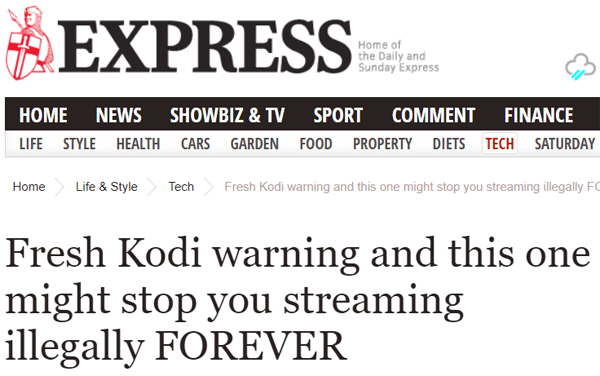 Reading the text, however, reveals nothing new whatsoever. The piece simply rehashes some of the historic claims that have been leveled at Kodi that can easily apply to any Internet-enabled software or system. But beyond that, some of its content is pretty weird.

The piece is centered on comments from two McAfee security experts – Chief Scientist Raj Samani and Chief Consumer Security Evangelist Gary Davis. It’s unclear whether The Express approached them for comment (if they did, there is no actual story for McAfee to comment on) or whether McAfee offered the comments and The Express built a story around them. Either way, here’s a taster.

Ok, stop right there. Kodi admits that it’s a streaming site? Really? Kodi is a piece of software. It’s a media player. It can do many things but Kodi is not a streaming site and no one at Kodi has ever labeled it otherwise. To think that neither McAfee nor the publication caught that one is a bit embarrassing.

The argument that Samani was trying to make is that services like Netflix and Amazon are generally more reliable than third-party sources and there are few people out there who would argue with that.

“Look, ultimately you’ve got to do the research and you’ve got to decide if it’s right for you but personally I don’t use [Kodi] and I know full well that by not using [Kodi] I’m not going to get any issues. If I pay for the service I know exactly what I’m going to get,” he said.

But unlike his colleague who doesn’t use Kodi, Gary Davis has more experience.

McAfee’s Chief Consumer Security Evangelist admits to having used Kodi in the past but more recently decided not to use it when the security issues apparently got too much for him.

“I did use [Kodi] but turned it off as I started getting worried about some of the risks,” he told The Express.

This idea, that people search for a movie or TV show yet get something else, is bewildering to most experienced Kodi users. If this was indeed the case, on any large scale, people wouldn’t want to use it anymore. That’s clearly not the case.

Also, incorrect content appearing is not the kind of security threat that the likes of McAfee tend to be worried about. However, Davis suggests things can get worse.

“I’m not saying they’ve done anything wrong but if somebody is able to embed code to turn on a microphone or other things or start sending data to a place it shouldn’t go,” he said.

The sentence appears to have some words missing and struggles to make sense but the suggestion is that someone’s Kodi installation could be corrupted to the point that someone people could hijack the user’s microphone.

We are not aware of anything like that happening, ever, via Kodi. There are instances where that has happened completely without it in a completely different context, but that seems here nor there. By the same count, everyone should stop using Windows perhaps?

The big question is why these ‘scary’ Kodi non-stories keep getting published and why experts are prepared to weigh-in on them?

It would be too easy to quickly put it down to some anti-piracy agenda, even though there are plenty of signs that anti-piracy groups have been habitually feeding UK tabloids with information on that front. Indeed, a source at a UK news outlet (that no longer publishes such stories) told TF that they were often prompted to write stories about Kodi and streaming in general, none with a positive spin.

But if it was as simple as that, how does that explain another story run in The Express this week heralding the launch of Kodi’s ‘Leia’ alpha release?

If Kodi is so bad as to warrant an article telling people to avoid it FOREVER on one day, why is it good enough to be promoted on another? It can only come down to the number of clicks – but the clickbait headline should’ve given that away at the start.

Update March 12: The main quote in the Express article has been edited from:

“Kodi itself is not illegal, but the use of add-ons that allow the streaming of illegal content make it an issue. Personally I don’t stream any illegal content through any platforms.”