Despite his site Megaupload sitting on the hit-list of the United States government, in 2011 Kim Dotcom managed to release a promotional video featuring some of the biggest names in pop music.

The track, known as Mega Song and produced by Printz Board and Kim Dotcom, featured huge recording artists including P Diddy, Will.i.am, Alicia Keys, Kanye West, Snoop Dogg, Chris Brown, The Game and Mary J Blige. These and many others were doing the unthinkable in their labels’ eyes – singing the praises of Megaupload.

But just a few hours following its release with the catchy and strangely addictive track still cycling endlessly in listeners’ ears whether they liked it or not, it was all over. Universal Music pressed the nuclear button and had the song removed from YouTube on copyright grounds.

With Dotcom threatening legal action the song was reinstated and eventually the controversy faded away with the video going on to pick up millions of views. In the end Megaupload withdrew their case against Universal, deciding that further legal action would prove a distraction against the backdrop of much bigger issues the company faced following the January 2012 raids.

But then, just a few hours ago and following the Mega launch party last weekend, Dotcom must’ve felt it was déjà vu all over again. Overnight yet more of his own content has been booted offline in what appears to be another example of overreaching conduct by copyright owners. So what’s the problem now?

On Sunday, to a worldwide audience of millions, Dotcom’s new site Mega held its launch party. As expected it was a loud affair featuring several musical performances from both local artists and Dotcom himself. 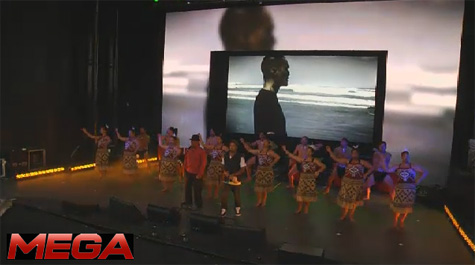 The whole thing was broadcast live on the web and later uploaded to YouTube for posterity but by this morning it was gone, a victim of a copyright takedown.

“Incredible: The GEMA in Germany took down our #Mega launch press conference video from Youtube for copyright claims,” Dotcom announced this morning.

In a message to the music rights group, Dotcom expressed disbelief.

“Dear GEMA, all songs in the #Mega press conference are my content. And the artist who performed LIVE gave us permission. WTF?” he said.

GEMA itself has a long-standing copyright dispute with YouTube which has forced many videos offline for German viewers. Running for more than three years already, two weeks ago GEMA announced that it had pulled out of its latest round of talks with YouTube on resolving their differences. However, during the takedown period last night, German YouTube users said they could still access Mega’s content.

In the meantime, Dotcom has come out fighting to get the launch video back online.

“I filed a counter-claim with Youtube and the video is back online. GEMA can expect mail from our legal team. Copyright madness,” Dotcom concludes.