Over the past several years Hollywood and its counterparts in the worldwide music industry have made huge strides in their efforts to complicate user access to so-called ‘pirate’ sites.

The theory is that if consumers find sites like The Pirate Bay more difficult to find, then the chances of those people buying official content will increase.

The first unlicensed site (AllofMP3) was ordered blocked in Denmark in 2006, and ever since rightsholders have been thirsty for more.

For almost a decade and with increasing frequency since 2010, site-blocking has been in the news, mainly centered around actions against torrent sites. In most cases of rightsholders testing the judicial waters around Europe, The Pirate Bay has been used as the guinea pig. History tells us that once The Pirate Bay gets blocked, the floodgates are well and truly open.

Although we’ve reported on every site-blocking court battle around Europe (including some that have been held behind closed doors), there are no publicly available central resources that provide an accurate overview of how many sites are blocked in each country. It doesn’t help that in UK, for example, rightsholders add sites to existing court orders without any fresh announcement.

Yesterday, however, the MPAA’s international variant, MPA Europe, provided some interesting numbers which highlight the extent of site-blocking on copyright grounds on the continent. The presentation, made by Deputy General Counsel Okke Visser at the iCLIC Conference in Southampton, UK, included the slide below. 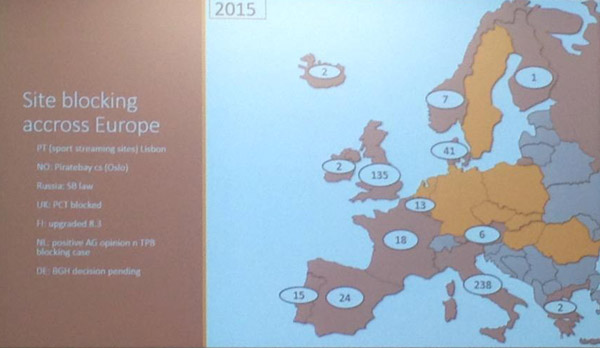 What the image shows is a total of 504 instances of web-blocking across Europe. It’s worth noting that some of the instances are duplicates, since sites like Pirate Bay and KickassTorrents are blocked in multiple regions. Also, it appears that proxies aren’t included in the total.

The region with by far the greatest number of blockades is Italy, down in the south of Europe with 238 instances. The country’s AGCOM agency has been ordering sites to be blocked at an alarming rate, with no trials needed for a blackout.

However, things haven’t necessarily been going to plan. Research carried out in Italy found that blocking only increased blocked websites’ popularity, via the so-called “Streisand Effect”.

It’s no surprise that the UK takes second place with 135 instances of blocking. Today they’re being ordered on behalf of Hollywood, the music industry, book publishers, sports broadcasters and even watch manufacturers.

The very first site to be blocked in the country on copyright grounds was defunct Usenet indexer Newzbin/2. The official process began in 2010 when MPA Europe, citing legal action in Denmark, asked local ISP BT to block the site. Subsequent court action resulted in an injunction and the floodgates were open for dozens of additional demands.

After being the site-blocking pioneer of Europe, Denmark now has 41 instances of site-blocking according to the MPAA. Earlier this year a large batch of torrent and streaming sites were blocked, followed by a second wave in August.

When new legislation came into effect in Spain in January, site-blocking was bound to follow.

Sure enough, in March 2015 local ISPs were given 72 hours to block The Pirate Bay and in April a block of a popular music site followed. According to MPA Europe, Spain now has 24 instances of blocking.

While blocking measures are in place across the whole of the far west of Europe, thus far plenty of countries are holding their ground. In the north, Sweden is currently block-free, but that could all change depending on the outcome of pending legal action.

After putting up a tremendous fight against the odds, the Netherlands also has no blocks in place. However, a case against local ISPs still has some way to run.

Slightly to the east, Germany has no blocks and to date there has been little discussion on the topic in Poland or Romania. However, neighbor Austria now has six instances of blocking after the movie industry won a protracted legal battle against The Pirate Bay and other sites.

Instances of copyright-related site-blocking across Europe