A few days ago the Pirate Bay’s original .org domain name was suspended by its registrar EuroDNS due to an administrative issue.

Instead of being greeted by the iconic pirate ship logo, users saw a warning message indicating that the domain registrant had failed to verify their WHOIS details.

This verification process is a requirement of domain oversight body ICANN.

While the .org was no longer the primary domain name of The Pirate Bay many people still actively used it, so the suspension was widely noticed.

However, the troubles didn’t last long and were resolved a few hours ago. At the time of writing thepiratebay.org is fully accessible, allowing people to browse the site without being redirected.

Whether the registrant, which is listed as Pirate Bay co-founder Fredrik Neij, verified the domain details is unclear. The domain was moved to a new registrar this week, which may have been used to circumvent the verification process. 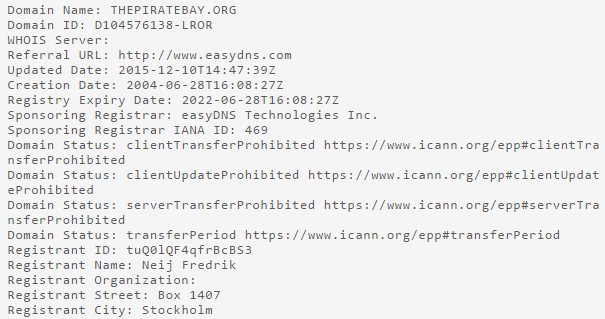 The .org domain was transferred to the Canada-based company EasyDNS, which has a track record for defending the rights of its customers.

For example, EasyDNS previously objected to domain suspension requests from City of London Police. The company took the matter to ICANN which ruled that registrars cannot block a domain from transferring-out without a court order.

For now it’s smooth sailing again for the notorious torrent site. Whether it’s through the .org domain, or one of several other official domains it uses.

RIAA Fails to Take Down Pirate Bay Domain, For Now