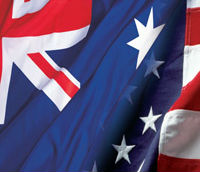 Seeking to crack down on the rise and rise of online file-sharing, governments in countries all around the world continually come under US pressure to do something about infringement.

Just a few days ago Vice President Joe Biden questioned how a country could consider itself “a law abiding nation”, “when they are stealing the most valuable intellectual ideas of our country.”

Few civilized country’s escape the wrath of Biden and his friends in Hollywood and yesterday news broke that after continuous pressure from the studios, the Australian government will soon consider the introduction of two new anti-piracy mechanisms.

The first, the graduated response, has been documented many times before and is already present in several countries. Site blocking is more controversial though, since despite being demanded by Hollywood abroad, the same is not practiced at home.

Today the Australian Pirate Party says that it will do all it can to ensure that neither mechanism lands on Aussie soil. With the launch of a petition resting on the notion that neither technique has been shown to be effective against piracy, the Pirates hope to stop the juggernaut in its tracks.

“There has been no evidence advanced that graduated response regimes are effective. In fact, academic literature on the matter has been skeptical that they have any measurable impact on reducing file-sharing,” Brendan Molloy, Councillor of Pirate Party Australia, told TorrentFreak in a statement.

“Our petition is intended to remind the Senate of its obligations as the House of Review. It lays out detailed reasons for opposition to the proposals — including that neither will work — and calls on the Senate to reject any legislation instituting either a graduated response scheme or website blocking.”

Research is available to back up the Party’s stance. A paper published in January 2014 by U.S. and French researchers found that three-strikes-style regimes did little to reduce piracy. Also in January, the Court of The Hague ruled that the web blockade previously ordered against The Pirate Bay was not only disproportionate, but also ineffective.

Like many before him, Molloy says that something needs to be done about Australians being treated as second-class citizens when it comes availability and reasonable pricing of content. Dealing with these key areas will go somewhere towards solving the piracy conundrum.

“Geographical market segmentation is causing Australians to pay more for digital content. Is it any wonder Australians are called ‘the world’s worst pirates’ when we are paying significantly more than everyone else? Surely these issues are more deserving of attention than attempting to introduce schemes that have been proven to be ineffective?”

The Pirate Party petition can be found on Change.org.