As one of the more popular user-submitted content sites on the internet today, Reddit and its community moderators have to work hard to keep the platform in order.

Content can be removed for a variety of reasons. ‘Content manipulation’ is the largest category and encompasses spam, community interference (so-call ‘brigading’), vote manipulation, and similar issues. For the purpose of this report, however, we’ll home in on the copyright issues faced by Reddit during the last year and how the site responded to them.

In common with the vast majority of large companies based in the US, Reddit has to follow the requirements of the DMCA which means that when it receives a valid copyright notice, it must comply by taking the identified content down. On the other hand, when submitters send notices that are incomplete or invalid in some other way, Reddit does not.

“In 2021, Reddit received 177,450 copyright notices reporting 920,672 pieces of content. This represents an increase of 104% from 2020. We removed 665,898 pieces of content in response to these takedown notices,” the company reveals in the latest edition of its transparency report. 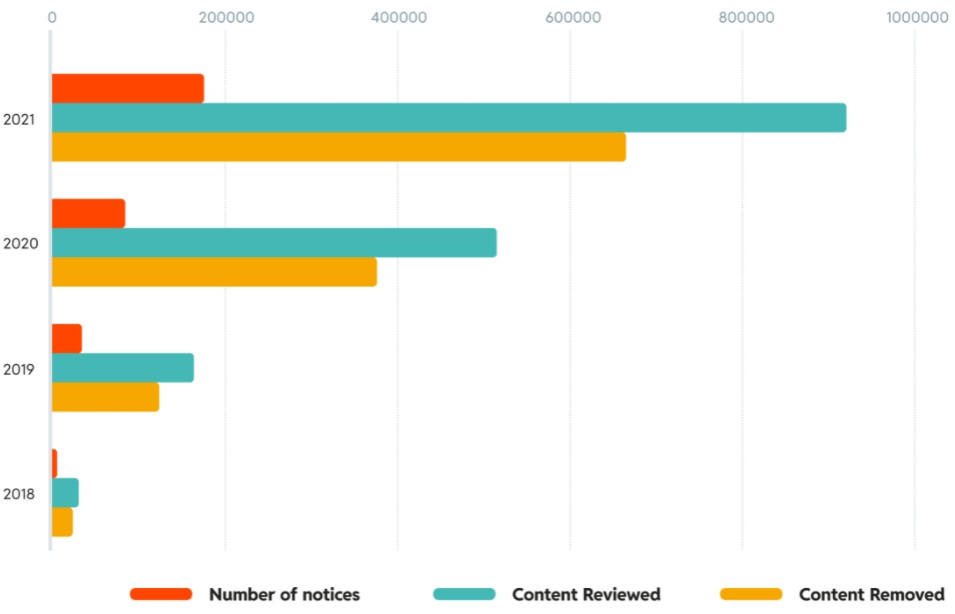 Under the DMCA, Reddit is also required to take “appropriate action” against so-called “repeat infringers”, which in the company’s case can involve the termination of not only user accounts but also entire subreddit communities, especially ones where “excessive amounts” of infringing content keep getting posted.

These figures represent a substantial increase over those published for 2020. In that year, Reddit banned just 303 users and terminated 514 subreddits.

Although overall copyright complaints are up 104% on the previous year, the site’s termination policy doesn’t appear to have changed significantly. This may suggest that some users and subreddits simply aren’t getting the message that by repeatedly posting infringing content, it can and will result in both them and their communities getting banned.

Any copyright notices sent to Reddit must comply with various rules. Primarily they must deal with copyright, not other issues such as privacy or harassment. When they do address copyright issues they must meet the requirements of copyright law and include specified information. Furthermore, the submitter must also consider whether the content they’re complaining about is being used legally, i.e under the doctrine of fair use.

Should a submitted notice fail to meet these requirements, action by Reddit is declined. In 2021 260,884 pieces of content did not qualify for removal due to invalid, incomplete, or duplicate copyright notices. These included a complaint from a video game publisher that requested the removal of posts purported to reveal game mechanics for a not-yet-released game.

“Although the notice claimed that ‘leaked images of the unreleased game’ infringed the publisher’s copyrights in the game, the only image found in either of the reported posts was a screenshot of further plain text description of game mechanics. Since the reported content was merely related to the rightsholder’s work but did not copy from it in a way that constitutes infringement, we declined to remove the content,” Reddit reveals. 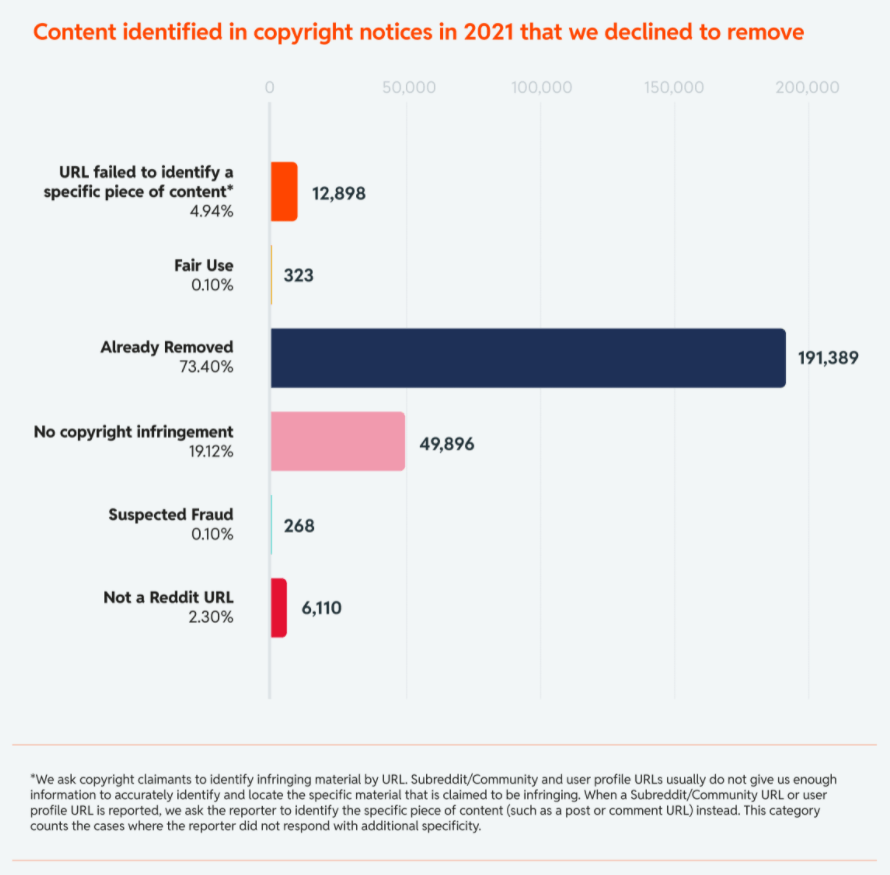 When someone complains about a specific piece of content and that content is taken down, under US copyright law the targeted user has the ability to appeal via a DMCA counter notice. Such counter notices are required to follow a structure but successful notices can result in content being restored. Content can also be restored if the submitter of the original notice issues a retraction.

With around 297 million pieces of content removed by Reddit in 2021, the 665,898 pieces removed on copyright grounds represent a small fraction of the overall problem. However, with user accounts and entire communities on the line, consequences can be great when errant users repeatedly and intentionally overstep the line.

The 2021 transparency report, which also covers law enforcement requests, can be found here