The last couple of months have been the most chaotic on record for the booming Kodi third-party addon scene. After years of largely interrupted service, a single lawsuit changed the entire landscape.

Last month, TF broke the news that third-party Kodi add-on ZemTV and the TVAddons library were being sued in a federal court in Texas. The fallout was something to behold.

Within days the ‘pirate’ Kodi community found itself in turmoil. Several high-profile Kodi addons took the decision to shut down and even TVAddons itself went dark without explanation.

At the time, unsubstantiated rumors suggested that TVAddons’ disappearance could be attributed to some coincidental site maintenance. However, with around 40 million regular users built up over a number of years, a disappearing Facebook page, and complete radio silence during alleged “routine maintenance,” something was clearly wrong.

It would’ve taken just a couple of minutes to put a ‘maintenance’ notice on the site but one didn’t appear back in June, and one hasn’t appeared since. Behind the scenes,
however, things have been shifting.

In addition to wiping the DNS entries of TVAddons.ag, on at least another couple of occasions the domain has been quietly updated. The image below shows how it used to look. 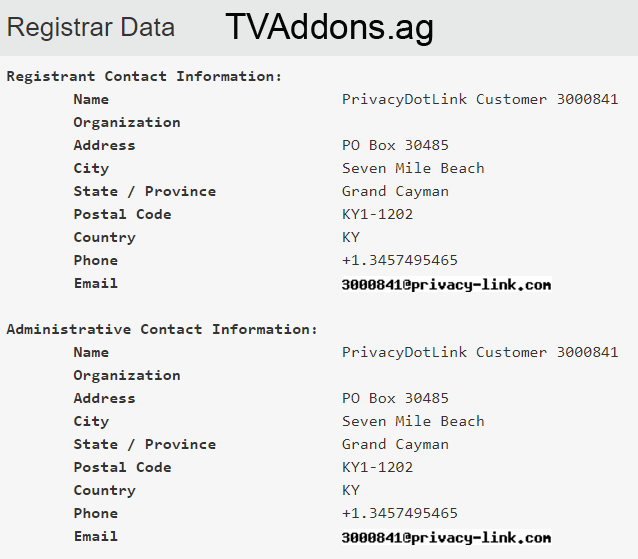 PrivacyDotLink refers to a service offered by Cayman Islands-based registry Uniregistry. Instead of displaying the real name and address of the domain owner (in this case the person behind TVAddons.ag), the registry replaces the information with details of its own.

The privacy service is used for many reasons, but it’s not hard to see why it’s of particular use to sites in the ‘pirate’ sector.

While some of the changes to the TVAddons domain during the past five weeks or so haven’t been obvious, this morning we observed the biggest change yet. As seen in the image below, its ownership details are no longer obscured by the privacy service. 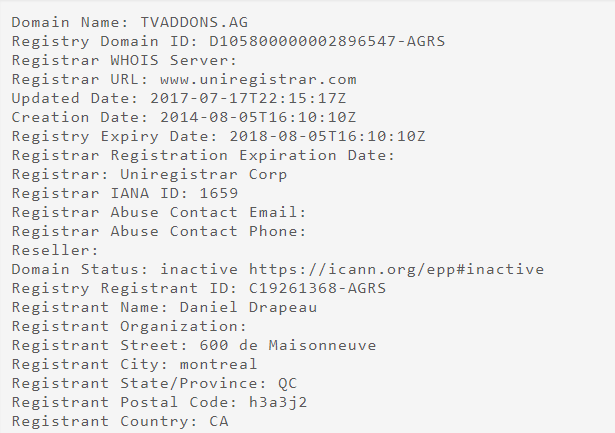 What stands out here is the name Daniel Drapeau. On closer inspection, this gentleman turns out to be a Canada-based lawyer who was admitted to the Quebec Bar in 1991.

“His forte is the strategic use of IP rights and litigation to achieve his clients’ goals, whether they be protective, aggressive or defensive. Specialties: Expeditive remedies, including injunctions and seizure orders.”

The other fresh detail in the WHOIS is an address – 600, de Maisonneuve West, Montreal (Quebec) H3A 3J2. It’s a perfect match for the premises of DrapeauLex, a law firm launched by Drapeau in 2012.

Only adding to the intrigue is the fact that other domains operated by TVAddons both recently and historically have also been transferred to the lawfirm.

While there are a few explanations for a lawyer’s name appearing on the TVAddons domains, none of them are yet supported by legal documentation filed in the United States. As of this morning, the Dish Network case docket had received no additional updates. No notice of action in Canada has been made public.

Nevertheless, as a past president of the Intellectual Property Institute of Canada’s anti-counterfeiting committee, Drapeau is certainly an interesting character in the IP space. As noted in a 2009 article by Professor of Law Michael Geist, Drapeau “urged the government to adopt a system of notice-and-takedown.”

At this stage, it’s unclear who Drapeau is working for in the TVAddons case. It’s possible that he’s working for Dish and this is a step towards the domains being handed over to the broadcaster as part of a settlement deal with TVAddons. That being said, the XBMChub and Offshoregit domains weren’t mentioned in the Dish lawsuit so something else might be underway.

TorrentFreak reached out to Drapeau for comment and clarification, but at the time of publication, we had received no response.