Last year, Torrentz.eu decided to close its doors. Without prior warning, all torrent listings were removed from the meta-search engine.

As is often the case with torrent sites, this gap was quickly filled. Just several hours after Torrentz has thrown the proverbial towel, several ‘copies’ popped up, eager to take its place.

The most successful alternative, in terms of traffic, is the elegantly named Torrentz2.eu. Unlike many others, Torrentz2 has always been upfront with its users and never claimed to be an official resurrection.

They just wanted to do what Torrentz did, or even better. This worked, as millions of users were drawn to the site. However, since a few days Torrentz2 is no longer listing any torrent links.

People can still search for files, but the site only lists file details and no links to third-party sites where these can be downloaded. 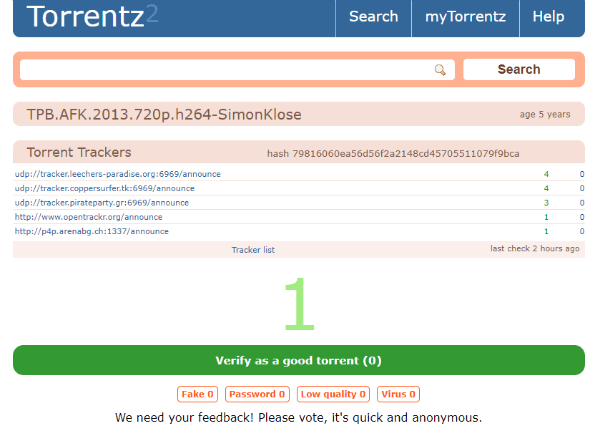 The problems first started earlier this week and have been persistent since at least Thursday.

To the broader public it’s unclear what’s causing the issue. It could very well be a technical problem that can be addressed easily, or perhaps something more severe.

Interestingly, new torrent data is still being added to the site. The links to other torrent sites are missing, however, which makes it pretty much unusable.

TorrentFreak reached out to the operator to find out more but we haven’t heard back yet. If we received a response the article will be updated accordingly.

Update: A few people rightfully point out that the hashes can still be used to download the files. There are even several Chrome extensions and Firefox addons that do this.