Twitch Streamers Deliberately Get Themselves Banned For Copyright Infringement

Twitch is best known for its video game live streaming but over time user behavior has taken the platform in new directions.

Of course, variety is great for the community, especially when fresh ideas inspire creativity and push the boundaries to enable progress.

But what happens when some of the platform’s most popular streamers jump onto a trend that most people know is likely to land both them and Twitch in hot water?

Since Twitch users are in control of what content they put out, the site’s terms and conditions (and the law) are essentially the only barriers to creativity. Stay within those parameters and all is fine but step outside and trouble can lie ahead. Given these basics, sticking to the rules shouldn’t be particularly difficult for streamers but for reasons best known to them, some are deliberately going rogue.

One of the latest trends on Twitch appears to be an extension of so-called ‘reaction’ videos. In these latest cases, however, it involves the streaming of TV episodes in near full screen alongside little to no reaction, effectively turning some Twitch streams into a pirate streaming service with added ‘watch party’ features.

Given the attention these streams are getting, it’s clear they are popular with users. Whether that is the main motivation behind putting these streams up remains a question but it’s pretty clear that if streamers are looking for negative attention from copyright holders, this is a good way forward.

Twitch Users Are Getting Suspended

With 8.8m subscribers, Pokimane is an extremely successful Twitch streamer. However, after reportedly streaming six hours of Avatar: The Last Airbender to her significant audience, she reported a temporary ban from Twitch on January 8.

“Confirmed 48 hour suspension!” she tweeted in response to the move.

“Just to be clear, I’m not surprised and I don’t think this is unfair. Imo, it was inevitable that publishers would take action, on me or someone else, during this react meta,” she added.

Pokimane is not the only high-profile Twitch casualty. Jeremy “Disguised Toast” Wang also received a suspension after reportedly streaming the anime show Death Note. In his case, however, the suspension appears to be a much more lengthy one.

Disguised Toast’s immediate reaction was that the suspension came too soon since it interrupted an episode while it still had 20 minutes to go. Unrepentant maybe, but certainly not unexpected.

Twitch Users Were Warned About Piracy

According to a Dexerto report, earlier this month streamer Ludwig Ahgren called out several popular Twitch users including xQc, Karl Jacobs, and Mizkif for participating in the so-called ‘TV show meta’, warning that nothing good will come from it.

“Recently there has been a swath of people on Twitch just outright watching TV shows. The biggest creator xQc does this quite often with MasterChef. It’s f**king crazy. They are just straight up watching TV shows on Twitch!” he said.

“Disguised Toast is just straight up watching Naruto. This morning I watched Myth watch Yu-Gi-Oh. Over a million people tuned in to watch Karl Jacobs watch Total Drama Island. And Rich Campbell watching Lord of the Rings on stream. Mizkif with like 41,000 viewers watched Home Alone! This is some pretty dangerous territory we are in!”

With 9.8 million followers on Twitch, streamer xQc is certainly a fan favorite but despite warnings from his peers about the perils of streaming TV shows on Twitch, he isn’t at all convinced there is a problem.

“I’m going to be honest, I think you’re just totally incorrect,” he said in response to a fan warning.

“People have been doing all this DMCA sh*t for the longest time ever, watching shows included. I don’t think it’s an issue, really. They enforce stuff based on how likely it is to blow up, and then Twitch has to ban you. TV shows don’t really have that. It’s why boxing is, like, extremely DMCA, so it’s insane.”

What is really insane is the prospect of provocative actions like these restricting the freedoms of all Twitch users moving forward.

Whatever side of the fence one sits on, be that pro-copyright or copyright-skeptic, this take from an influential streamer is pretty bewildering, especially one that was previously suspended from the platform for streaming the Tokyo 2020 Olympics.

While people have been doing “all this DMCA shit” for two decades now, there have always been consequences. Not once have copyright holders and governments responded to blatant provocation with a loosening of the law or a reduction in enforcement. It doesn’t work like that.

Given its corporate might, Twitch owner Amazon can certainly look after itself on the legal front but if Twitch streamers want their platform to be policed increasingly heavily into the future, restricting their freedoms and their fun, repeatedly poking the bear is the right way to go about it. 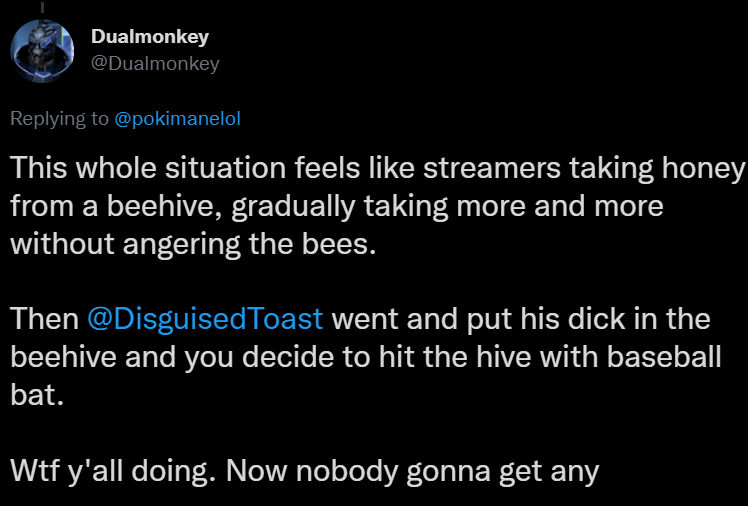 That said, if Twitch ‘TV meta’ streamers won’t think of the platform itself or the future freedoms of their peers, perhaps they should consider becoming familiar with the ‘repeat infringer’ aspect of the DMCA.

In order for Twitch to remain eligible for its ‘safe harbor’ protection under copyright law, it needs to show that it takes action against infringers. In the case of repeat infringers it needs to terminate them “in appropriate circumstances.”

The definition of “appropriate” can vary but there is a way to find out how much Twitch is prepared to put up with. But by then it will already be too late.