Private torrent sites are members-only platforms that usually facilitate sharing of copyright content between a tightly-controlled network of like-minded individuals. Focused on the Danish market, Asgaard was one of the more popular local platforms.

Asgaard was founded in May 2019 and those who were able to gain access became part of a thriving sharing community. However, due to a tightening enforcement environment in Denmark, 2020 became a year to forget for most pirate torrent sites in the region.

Investigations carried out by Danish anti-piracy group Rights Alliance and the government’s SØIK’s IP-Task Force led to the closures of both DanishBits and NordicBits. In response, Asgaard opened its doors to new members and swelled in size, but the party wouldn’t last for long.

With Rights Alliance monitoring the site and its growth, just weeks later Asgaard announced it would close down in preference to having the “doorbell ringing one day” with the police on the other side of the door. The shutdown did not prevent that from happening.

Seven Arrests in a Matter of Weeks

Days after the announcement, a 50-year-old from Middlefart was arrested and spent Christmas 2020 and the New Year in prison.

In June 2021 at the court of Odense, the man was convicted of copyright infringement offenses related to the sharing of thousands of films, TV series, music tracks, comics, and books. He rented a server, set up payment services, and handled customer support requests. For this, he received a four-month prison sentence of which three months were conditional.

In February 2022, a 43-year-old man was handed a three-month conditional prison sentence and community service by the court in Odense for his contributions which included server management and coding work.

Of the seven arrested, two had been brought to justice but following new convictions this week, that has now swelled to four.

According to an announcement by Rights Alliance, two more ‘ringleaders’ of Asgaard were convicted of criminal copyright infringement offenses this week. On Tuesday, the men (aged 54 and 35) were both handed three-month conditional prison sentences and 80 hours of community service.

The 54-year-old from Assens helped to manage the website and categorized torrent files to optimize the user experience. He also faces a confiscation order for DKK 2,282 (US$338) and a mobile phone and must pay DKK 35,000 (US$5,195) in compensation.

One of the men accepted the verdict while the other is considering whether to appeal.

Then There Were Three

According to Rights Alliance, the convictions of four men leave three prosecutions to go.

One man, a 46-year-old, is described as the Asgaard ‘press officer’ for his role in writing and publishing news items for members of the site. The second is described as a 50-year-old ‘accomplice’ who acted as a moderator of the site until he was “thrown out” by the others. The details of the final person are yet to be revealed. 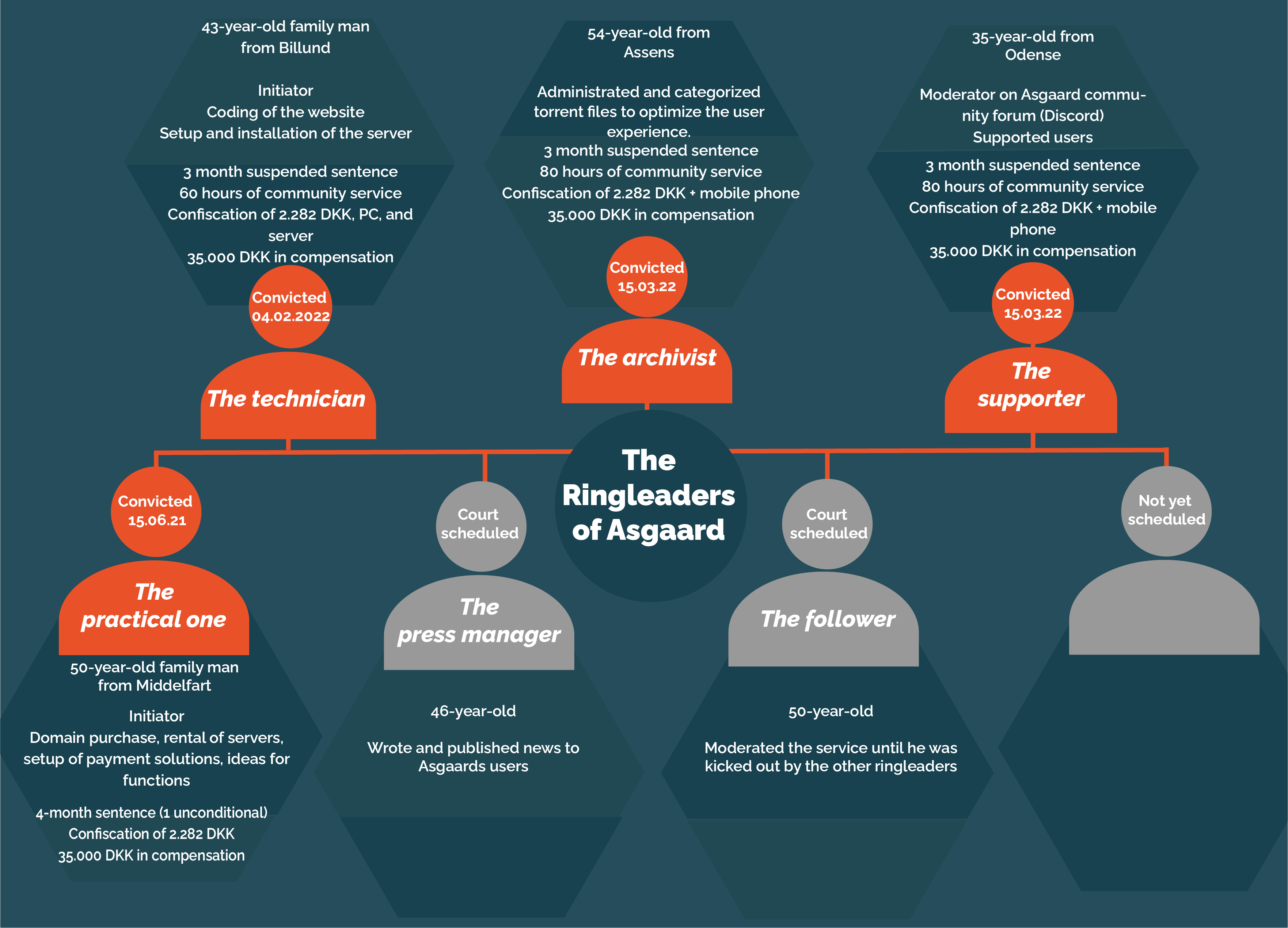 The anti-piracy group says the identities of all people behind the “criminal network” are known, marking the first time that all operators of a single Danish file-sharing site will be brought to justice.

“For each completed case, a clearer picture emerges of how the people behind the file-sharing service organize themselves and what methods they use. We are becoming increasingly aware of the illegal market and the behind-the-scenes cases may contribute insights that will be crucial in the IPR unit’s future efforts to prevent copyright infringement on the Internet.”

The National Unit for Special Crime (NSK) says that the convictions will please the movie company clients of Rights Alliance.

“It is gratifying that the prosecution’s handling of the cases has led to financial compensation for the Rights Alliance, which represents a large number of members, including Nordisk Film, Zentropa, Scanbox Entertainment and SF Studios,” adds prosecutor Christian Raaholt Hahn.